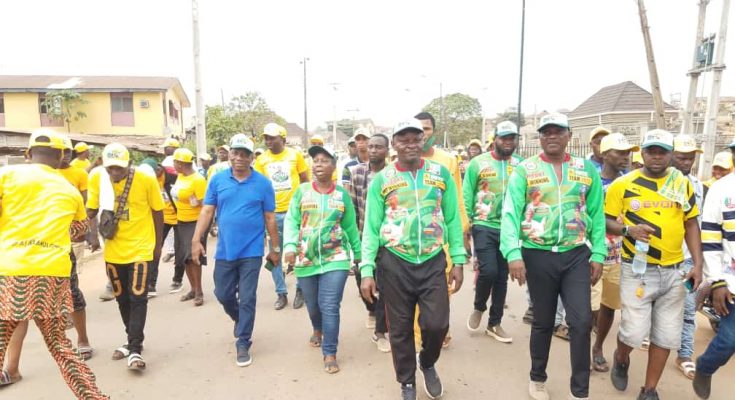 The joint transportation unions in Ijebu North Local Government area of Ogun State, on Sunday staged a solidarity walk in support of the second term bid of Governor Dapo Abiodun.

The rally was led by the newly appointed Senior Special Assistant to Governor Dapo Abiodun on Transportation, Alhaji Moibi Olufodun. The road walk was in a bid to show unflinching and unalloyed support for the second term ambition of Prince Dapo Abiodun, MFR.

While addressing the members of the transportation unions, the Secretary to the State Government of Ogun State, Mr. Tokunbo Talabi, on behalf of Governor Dapo Abiodun, assured the stakeholders in the transport sector that the sanity and stability which had been created in the transportation sector would be maintained, and would bring in more dividends to the unions and the generality of the good people of the State.

In own address, the candidate of the APC in the forthcoming general elections in Ijebu North/Ijebu East/Ogun Waterside Federal Constituency, Hon. Joseph Folorusho Adegbesan, promised to
create synergies between him and the transport unions in the federal constituency and an all inclusive programme if elected into office.

In the same vein, the APC House of Assembly candidate in Ijebu North l State constituency, Hon. Sylvester Abiodun Niyi, called on the people of Ijebu Igbo to use their PVC to support Governor Dapo Abiodun by voting him for a second term in appreciation of the many landmark projects the administration had executed in the local government.

Prince Segun Kaka, the APC candidate for Ijebu North ll State Constituency, appealed to the people of Ago Iwoye/Oru/Awa/Ilaporu to vote for him on the basis of his capacity, character and competence. He promised to ensure better, effective and equal representation of all.