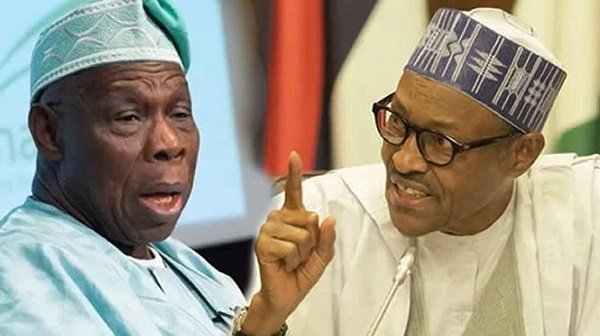 Professor Wole Soyinka’s recent agreement with former President Olusegun Obasanjo on the latter’s view on “moving Nigeria away from tipping over” and  Soyinka’s comment: “I embrace the responsibility of calling attention to any accurate reading of this nation from whatever source, as a contraption teetering on the very edge of total collapse” is a development that deserves better attention from President Muhammadu Buhari and other Nigerian leaders and patriots.

It is significant that the two leaders who are generally known to be ideologically distant from each other seem to be on the same page on what has become known to many Nigerians as an unsavoury state of inadequate security and lack of inter-regional peace across the nation under Buhari’s presidency. Soyinka’s statement is in sync with his flair for recognising a well-supported argument backed by incontrovertible evidence, such as the recent one from Obasanjo.

What deserves greater media attention is the dismissive response from the presidency of the claims by Obasanjo. Calling former President Obasanjo a ‘divider-in-chief’  for drawing attention to lapses in management of the country’s diversity is patently denialist, more so when calls for secession and re-federalisation are on the rise, probably more than they were in the era of Sani Abacha. Worries about insecurity and associated threats to national unity and development deserve more attention than they have received, especially that such worries have emanated from somebody who had been commander-in-chief in the country for almost 12 years as a military dictator and an elected president.

But the significance of an unusual agreement between Obasanjo and Soyinka on assessment of Nigeria’s condition is not the point of this editorial. The real import of Soyinka and Obasanjo’s audit of the situation of Nigeria in the last few years can be located in the degree of congruence between the thoughts of Soyinka and Obasanjo on the one hand, and those of non-elite citizens about nation-wide insecurity and ethnic and regional domination and disharmony that have made one nationality to feel privileged while many others are made to feel marginalised, on the other.

In normal climes, President Buhari should have been worried about Obasanjo’s statement. Given that both leaders love to refer to themselves as civil war heroes, and to use the country’s civil war as a means of preaching the lesson of national unity and development. It is puzzling that President Buhari has preferred to see the messenger rather than the message in Obasanjo’s speech in Abuja at a consultative dialogue attended by various socio-cultural groups, including Afenifere, Middle Belt Forum, Northern Elders Forum, Ohanaeze Ndi Igbo, and Pan Niger Delta Forum, organisations that in their combination cover more than half of the country. In most advanced democracies, such dismal scorecard on national governance from a former fellow military head of state and an elected president and commander-in-chief would deserve full attention from the incumbent president, especially at a time that there are incontrovertible signs of insecurity and restiveness across the land.

If former President Obasanjo gleefully tore his political party card five years ago to demonstrate his total support for the candidacy of Buhari, his observations, as discomfiting as they may seem, deserve a more strategic attitude than name calling from President Buhari’s media assistants. Soyinka and Obasanjo have not said anything that many groups across the country have not said about insecurity and insensitivity on the part of the Federal Government to the concerns of most of the country’s nationalities. These two leaders have expressed the feelings about Nigeria in many homes.

It is neither strategic nor wise for the Federal Government to ignore complaints of Obasanjo and Soyinka about threats to the soul of the nation. Nigeria is at least currently in theory a federation and no government should feel unconcerned about inadequate security of citizens or do anything to erode the sense of belonging of any citizen(s) in the federation under any circumstance. A situation in which citizens are killed on their farms or on the roads by fellow Nigerians who are herdsmen or herdsmen from neighbouring countries is serious enough for the Federal Government to prefer dialogue to name calling. If Obasanjo had acted like divider-in-chief, then Buhari should make concerted efforts to act like unifier-in-chief. This is what the constitution expects from every president of a federation.