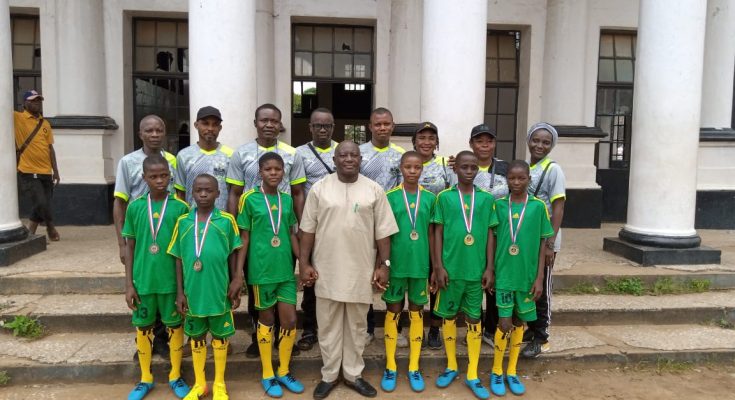 The eight medalists, who are from different primary schools, represented Ijebu-Ode Local Government at the competition, held at the Otunba Dipo Dino International Stadium, Ijebu-Ode were granted awards of scholarships.

The council boss made the announcement when a contingent of the medalists and the coaching crew paid him a courtesy visit on Wednesday at office.

While expressing his joy on receiving the team, he announced that Ijebu-Ode Local Government will give scholarships, covering the costs of uniforms and school fees, to the students, six of whom have just gained admission into Secondary schools, for their first year of study in school.

Saying, the same will apply to the remaing two, who are starting primary six in the next academic session. He also announced a cash prize of ten thousand naira for each of the student-medalists and one hundred thousand naira for the coaching crew.

The prizes were presented to the students on Friday, 16th Septembet, 2022, at the Itoro, Ijebu-Ode office of the Chairman.

At the event, which had the medalists, the executive members of National Association of Primary Schools Games and Sports Teachers, NAPSGAST, parents were graced the occasion.

The council boss, expressed his appreciation of the success of the students and the giant strides of the Games Masters in training them.

He applauded the athletes for their perseverance and endurance during the preparations for the games, when some of their colleagues opted out due to the seemingly tough situation in their camp.

He urged them to continue to be good ambassadors of, not only Ijebu-Ode Local Government, but to the nation at large, described education as bedrock of success.

While appreciating the coaching crew, he implored them to keep up the good works, assuring them that their reward will certainly come.

In his response, Mr O. D. Rosanwo, the Ijebu-Ode NAPSGAST Branch Chairman, commended the Executive Chairman for his unflinching support and promised that they will be given more dedication to the training of student-athletes in the Local Government.

Speaking on behalf of the medalists, Miss Nwakpa Kosarachi, appreciated the Council boss, assured him that they will strive harder in their studies and other curricular activities.