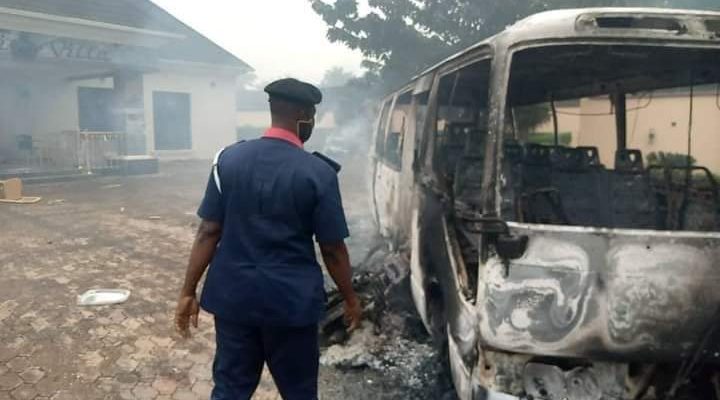 Residents of Agosasa community in Ipokia local government area of Ogun State have called on Gov Dapo Abiodun to institute panel of inquiry on the violence that rocked the town on Monday allegedly leading to the death of three persons and loss of properties worth millions of naira.

The peace of the ancient border town was said to have been shattered over who becomes its next traditional ruler following the death of Oba James Elegbede early this year.

Oba Elegbede, the first traditional ruler of the town was said to have reigned for 22 years as a Baale and another 23 years after he was promoted to be king.

Speaking with our Correspondent on this bloody crisis, Mr Samuel Oyero has however pointed accusing fingers at the popular socialite, Akeem Adigun fondly called Socopao saying that he remains the major instigator of this needless crisis.

Oyero who claimed to be the youth leader of the community said that after the demise of Oba Elegbede, the community according to the laid down rules move to the next ruling house, Fadeyi Alaga and chose Prince Abogunrin Sunday Olasina as the successor to the throne.

“So, after the two ruling families for Ago Oke met, it was agreed that the family of Fadeyi Alaga should produce the next successor to the throne and that was how Prince Abogunrin Sunday Olasina was unanimously selected as the Oba-elect for the town and he was subsequently asked to go into seclusion (Ipebi) in preparation for the necessary rites to the throne”.

He said the choice of Abogunrin was such that the whole community supported and was only waiting for the approval of the state government when Akeem Adigun all of a sudden allegedly began parading his brother, one Akinpelu Azeez as the person to be the next traditional ruler of the town.

Oyero said the popular socialite went as far as telling whoever cares to listen in the town that he is a friend to Gov Dapo Abiodun and that he had allegedly been empowered by the state government do whatever he wishes to do as far as getting the next occupant of the throne is concerned.

He said the community had decided to ignore him and was patiently waiting to hear from the state government when the news got to them on Monday afternoon that Socopao had allegedly killed one Nafiu Amosun at Ibatefin while coming from Idi Iroko.

He explained that “what we gathered was that while Nafiu was on motorcycle coming from Idi Iroko, as they got to Ibatefin, a community before Agosasa, they met the convoy of Socopao and while Nafiu continued with his journey, Socopao turned back, hit the motorcycle that was carrying Nafiu and then shot dead the young man.

Oyero described Nafiu as an aide that the community appointed for Prince Sunday Abogunrin, when he was selected as the next Oja of Agosasa.

He alleged further that Socopao had also been using security personnel, especially the soldiers to terrorise those seen not to be his supporters in the town saying that one Wasiu Fadeyi who is now feared dead and Fatai Fadeyi among others were also allegedly picked up by the soldiers late Tuesday night.

He said that “it is so obvious that Socopao is the main problem here or how can you say because you are close to the governor, then you can take the law into your hand and turn a hitherto peaceful exercise to something horrible? Is it that anyone that is close to the governor is licensed to kill?

“We demand for a probe of this ugly incident and urge our governor, Prince Dapo Abiodun to wade in and ensure that justice is done”.

Our Correspondent gathered that long before the demise of Oba Elegbede, Socopao had allegedly been running what looks like a parallel leadership.

Speaking in the same vein, Oose Malik, an indigine of the town corroborated what Oyero said alleging that Socopao remain the brain behind the bloody crisis that led to loss of lives and properties worth millions of naira in the community.

Malik while speaking with our Correspondent alleged that but for the killing of Nafiu Amosun by Socopao at Ibatefin, the misunderstanding couldn’t have snowball into a mayhem which has now made many people to desert the town.

He alleged further that the popular socialite had also found allies in some security personnel, especially the soldiers who he now use to terrorise those seen not to be supportive of his intention to install his brother as the next traditional ruler of the community.

Malik said “our pleas as a community is that the governor should please come to our aid or how can someone think that because he is very close to the governor, he can just decide to go against the wish of the whole community and even be ready to kill with impunity? This should not be allowed to go unpunished.

“Gov Dapo Abiodun must help ensure that justice is served on this act of savagery and contempt for the law of our land”.

The State Police Public Relations Officer, PPRO, Mr Abimbola Oyeyemi who confirmed the incident stated that houses and vehicles were burnt during the violence were owned by the duo of Chief Akeem Adigun and a former council Chairman Mr Isiaka Aderounmu.

Mr Oyeyemi who said normalcy had been restored in the area while some persons were arrested for their alleged involvement in the crisis maintained that only one person was killed.

The police spokesperson cautioned the people against resorting to jungle justice in expressing their grievances and advised them to seek legal redress while relying on the approved system for resolving Chieftaincy issues.