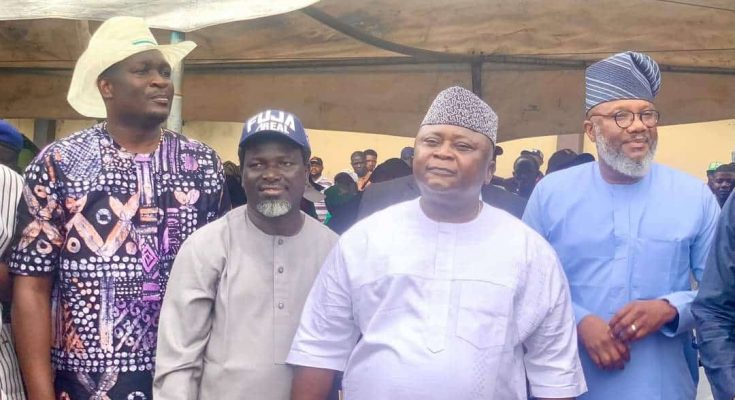 ‘We are ready to win election in 2023’ – says PDP reps candidate, Toyin Amuzu

The house of representatives candidate of Peoples Democratic Party, PDP in Abeokuta South federal constituency has expressed the readiness to win election in 2023.

Amuzu, who revealed this during a familarization meeting held at Peoples Democratic Party, PDP secretariat along Oke-Mosan today 12th of September, he pleaded to the party members to enter all units in getting more members to join the wining party towards 2023 election.

The distinguish personalities present at the meeting were, Hon Oladipupo Adebutu, Hon. Abdulkabir Akinlade, Hon Olumide Aderinokun, Hon Idowu Olowofuja among other candidates of the party to welcome the new members to the party.

Meanwhile, he talked on the court case where the All Progressives Congress, APC sued the governorship candidate of PDP, Hon Oladipupo Olatunji Adebutu and it’s deputy, Hon Abdulkabir Akinlade during the weekend, he told the members to ignore the distraction that it lacks merits in all ways, saying the opposition party is only looking for a way to distract the candidates of People’s Democratic Party, PDP because they knew the party is very ready for the election.

” I welcome the new members to the People’s Democratic Party, PDP, I can assure you that I will always support the wellbeing of my people in Abeokuta South federal constituency at all times, I want to appeal to you all to move out in mass to campaign of our party once the Independent National Electoral Commission, INEC lift its embargo on campaigns for political parties in the country, I am ready to lead the campaign to all polling units to express our readiness to win elections in 2023″ Said Toyin Amuzu.

Also he said “On the court case, I want to urge you all to ignore the jamboree as the opposition party is only using that to distract us because they know we are very ready to win elections, let us continue with our works without exercising any fear.” He added.

However, Hon Oladipupo Adebutu said fifteen states out of the thirty-six are in total support of the presidential candidate of People’s Democratic Party, PDP left with seventeen which he believes having four more state will make them win with landslide victory in 2023.

He implored the members to improve in their membership drive and bring all aggrieved people in other parties to People’s Democratic Party, PDP saying it is the only party that can touch people of Ogun state directly on infrastructure projects without any doubt.