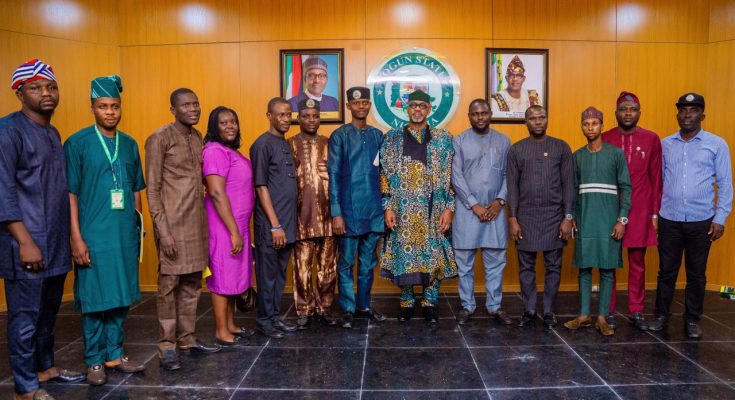 Youths in Ogun State under the aegis of the National Youth Council of Nigeria (NYCN) has declared their total support for the second term ambition of Governor Dapo Abiodun, positing that building economic development can only be achieved through political stability.

The president of the NYCN in the state, Abdul-Jabar Ayelaagbe, gave this position while speaking on behalf of members of the council, on Tuesday, during a courtesy visit to Governor Dapo Abiodun, in Abeokuta.

He expressed the delight of his members over developmental strides of the governor in the state.

Ayelaagbe, while noting that Governor Abiodun has changed the narrative behind governance by adding human face to administration, noted that the state helmsman has also shown that governance isn’t about talking and boasting about what can’t be achieved.

Ayelaagbe who expressed his delight at the construction of the Agro Cargo Airport in the state, said the ripple effects of the airport would see jobs created for unemployed youths in the state.

He, however, solicited support of the state government in organizing a youth economic summit tagged Ogun Youth Economic Summit (OYES), noting the summit would help youths in the state see other economic opportunities they could tap into.

Abiodun, while noting that youths in the state are intellectuals and forward-looking, promised that his administration would support the staging of the Ogun Youth Economic Summit .

The state helmsman noted that hr would look at the possibility of completing the Youth Development Center, adding that his administration would also look to contributing it’s quota towards the berth of the youth parliament in the state.

Abiodun, therefore, charged the Council to join his administration to tell the story of the new Ogun State.

Previous PostOgun To Build Additional 224 Housing Units Next PostWe'll carry you along in our decision making, Abiodun tells community leaders