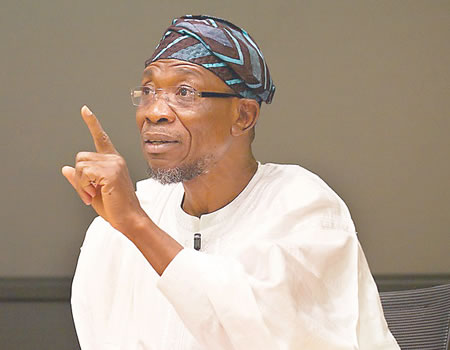 A special consultant to the Minister of Interior on Security Matters, Dr. Dipo Okeyomi, has put a lie to a festering rumour that the Minister, Ogbeni Rauf Aregbesola, was behind the defeat of Governor Gboyega Oyetola.

He said there was no truth in the claims that Aregbesola switched the votes of All Progressives Congress (APC) for opposition Peoples Democratic Party (PDP) in last Saturday’s governorship election.

Rather, Okeyomi said what happened in Osun was only the expression of the desire of majority of voters in the state, as attested to by President Muhammadu Buhari.

“It is normal for some people to insinuate that it was the disagreement between the governor and the Minister that caused the former’s defeat at the poll; but the truth is that Ogbeni Aregbesola never campained against Oyetola, either remotely or openly.

“The Minister is a loyal party man and he is experienced enough to know that even within a family, there can be disagreements but that siblings will not because of that, desecrate the family name outside.

“Aregbesola is a loyal APC member and will never engage in anti-party activities of any sort.

“All of us were in Osun to support Oyetola in the first term contest as directed by Aregbesola.

“As a loyal party member, I called some leaders before the election to forget about this ‘roforofo’ fight and focus on the coming election; they refused to make peace among themselves.

“We are bound to fight and we should not shy away from settling our differences before it is too late. But we need to put our house in order before 2023,” Okeyomi counselled.

He particularly recalled that Aregbesola was able to secure second term during his era as governor of Osun based on his achievements, which the masses endorsed.

“What is important in Osun is that the people have spoken and we should all move forward for the overall goal of unity, peace and development,” he urged.

However, Okeyomi called for peaceful coexistence and team spirit among APC members, noting that what took place in Osun was a big lesson, that undue clash of knocking the head of two party leaders against each other can never bear any good fruit.

He cited his experience in Lagos, of how some people ganged up to snatch from him, the Ojokoro chairmanship ticket which he duly obtained, simply because he worked hard for the first term tenure of Governor Babajide Sanwo-Olu, and for also being close to Aregbesola.

He said those behind the subterfuge and who are still on it, love neither APC presidential candidate, Asiwaju Bola Tinubu, nor Aregbesola but are only fighting for their pockets.

He said of his experience: “They are still fighting some of us in Lagos that worked for the success of Governor Sanwo-Olu. People can attest to what we did; I don’t know what they want to gain from it.

“Governor Sanwo-Olu is a reliable governor that doesn’t listen to useless talks; they would have pursued us from Lagos; the victory that we fought for is what some people are enjoying today.

“They forcefully withdrew my mandate after I won the chairmanship primary election because of Rauf (Aregbesola), what is their gain in all these? They are still bragging to deal with us and teach us sense after we left everything for them.

“They are fighting us everywhere, every angle, just because of their pockets, not for the love of Asiwaju Bola Ahmed Tinubu or Gov Babajide Sanwo-Olu.”

He said further: “They want to be champions of all causes, they cannot mobilise a single person, rather, they are more of curses to our party.

They will go and be telling Asiwaju lies about everybody, just to destroy you, they forgot we have God. How on earth can someone be saying they should not allow me to get involved in the party activities with thousands of my followers which they know.

“The party we built together! I pray our leaders wake up now, bring everybody together, both local government chairmanship aspirants in the last election that paid huge amounts of money and won tickets but were denied the tickets later; and all the party members that contested for party primary elections this year.

“If you tell them the truth, they will go and report you that you’re doing anti-party activities; we are praying for our own Sanwo-Olu in Lagos: people love him but the leader should help this nice man.

“I told him to talk to Oyetola to make sure he appeals to Asiwaju to rethink and settle with his protege. But now, look at the outcome.”

Okeyomi thus appealed to some politicians within the APC to learn from what happened in Osun and stop “knocking their leaders against each other for personal gains”.