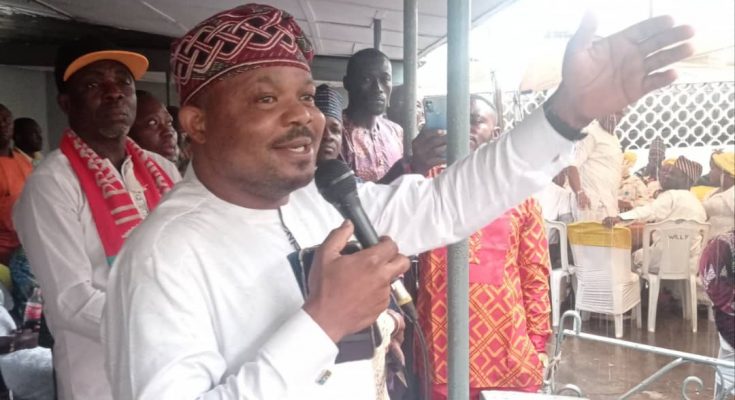 The desire of Gov Dapo Abiodun for another term, on Monday received a major boost as over 2000 leaders of Dapo Abiodun Continuity Agenda (DACA) drawn from the 20 local governments in the state vowed to mobilise at least 5,000 votes per local government to ensure landslide victory for Gov Abiodun in 2023.

The teeming leaders of the support group for Abiodun’s second term made this vow at Eid-el-kabir get-together party held at Iperu Remo and hosted by Mr. Armstrong ‘Tope Akintunde, a chieftain of the ruling party, APC and convener of the political group.

Speaking on why Gov. Abiodun deserves another term, one of the leaders of the group from Ijebu-Ode local government, Omoba Tunde Olowu explained that there is no better way to reward Gov Abiodun’s good intention to leave the state far better than he met it than to allow the governor continue his good works beyond 2023.

Olowu said “given the stiff opposition of immediate past governor of the state, Sen Ibikunle Amosun to the emergence of Prince Dapo Abiodun as his successor, many of us in Ogun East had thought that there is nothing for us if Prince Abiodun eventually become the governor, we had thought Gov Abiodun won’t touch those uncompleted road projects of former Gov Amosun.

“Surprisingly, Gov Abiodun had not abandoned us, he has rather completed those projects left by Amosun and added more. Gov Abiodun has shown so much of an Omoluwabi and very humane with governance, Ogun truly deserves to have his type for the maximum period as guaranteed by the constitution”. We have equally resolved to mobilise at least 5000 votes for the governor’s second term ambition.

Speaking in the same vein, another leader of the political group from Ifo Constituency 1, Mrs Mabayoje stated that it would be an unpardonable error if every lover of progress in the state would fail to lend total support to the second term bid of Gov Dapo Abiodun.

She disclosed that “there is no gainsaying the fact that Gov Dapo Abiodun had been a godly leader and someone who really has listening ears and care for the people.

“All these are reflecting in what the governor had been doing in the area of road construction, housing, agriculture, education, health as well as women empowerment. The popular opinion out there is that of one good term that deserves another. Gov Abiodun has done so well with his building together our future agenda and we have equally decided to mobilise en mass for his second term in 2023”.

Similarly, the newly appointed coordinator for Dapo Abiodun Continuity Agenda in Ijebu East, North and Ogun Waterside, Prince Adeyemi Babatunde Adelaja, a United States trained real estate consultant revealed that the task of returning Gov Dapo Abiodun to Oke Mosan for another term of four years in 2023 should be the project everyone who want the best for the state.

Adeyemi stated that “given the score cards of Gov Abiodun in all the critical sectors especially in the area of infrastructure, the governor deserves a pat on the back and all hands must be on deck to work for his second term.

“Despite the dwindling resources, the governor has reconstructed Sagamu-Siun-Abeokuta road, he has constructed Ijebu Ode-Epe ten lane, Ilisan-Ago Iwoye road is receiving due attention, by December, the much talked about Agro-Cargo Airport will be commissioned by the President Muhammadu Buhari, this is a government that has equally increased youth participation in governance, the list is endless. It is based on all the aforementioned that 90% of residents of Ogun State have said that the second term ambition of Gov Dapo Abiodun is a worthwhile venture”.

Making his remarks at the event, the convener of the political group, Mr Armstrong ‘Tope Akintunde lauded the leaders and members of the group for their commitment and dedication to ensure landslide victory for Gov Abiodun during next year election.

Armstrong disclosed that aside being from same town with Gov Abiodun, he was actually moved to set up the group as a way to further encourage the governor to be more dedicated to leaving the state far better than he met it.

The popular property merchant said “we all know that governance is very strenuous and even a thankless job. Luckily for us, we have a governor who has the love of the people at heart, he wants the best for his people, he can feel the pain of his people and from day one in office has been working to make life more bearable for all.

“What else can we do with our little resources and time than to support him and encourage him to do more for the people. This was why we formed DACA and we thank God that since our coming on board over two years ago, we have been complimenting the governor’s efforts in the area of empowerment and sundry support for members of our great party.

“At least over a thousand have benefitted from our various empowerment programmes ranging from motorcycles, deep freezers, barbing kits, make up kits, grinding machines to cash gifts. We hope to do more as we really mean business and for us in DACA, Gov Abiodun’s second term is not negotiable.

“The good work of the governor can only be rewarded with another term of four years. I therefore urge all of you DACA leaders across the 20 local governments to rev up your good work, work day and night to mobilise for the success of the governor’s second term bid and all of you, including every resident of the state will never regret to have been part of this success story”.