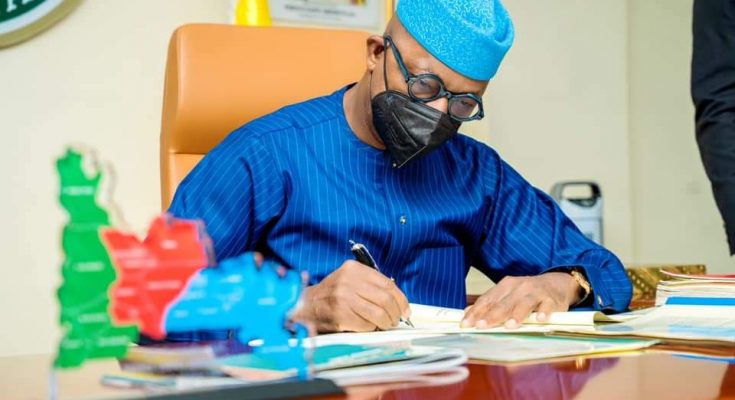 Abiodun, who announced his deputy, Noimot Salako-Oyedele, as the chairman of the committee, declared that his administration was ready to enforce speed limit as part of efforts to reduce carnages on the state roads.

He added that speed readers and cameras will be also be installed on the roads to monitor compliance to traffic rules and regulations.

The governor further disclosed that the State Traffic Compliance and Enforcement Corps (TRACE) would be provided with adequate logistics and human resources, while the Vehicle Inspection Office (VIO), would be repositioned to ensure that vehicles plying the roads are in good condition.

“We have observed the rapid increase of accidents on some of our newly completely roads, consequently, we will be enforcing Speed Limits through the use of Speed Readers and Camera, whilst providing emergency services such as tow truck, ambulances, fire trucks to assist accident victims,” he noted.

While noting the importance of road in the socio-economic life of Nigerians, Abiodun said though efforts were being made to improve on air, water and rail transportation, his administration would continue to pay attention to roads and how to make them safe for the users.

The governor stated that effective transportation system, using the multi-dimensional strategy which included among others, mass bus transit had been put in place, while over 600 kilometres of roads had been reconstructed and rehabilitated across the state.

He also hinted that his administration was partnering with the Federal Government and industries domiciled in the state to have some roads reconstructed under the Free Tax system.

He, however, lauded the Federal Government for setting up the Nigeria Road Safety Strategy and called on all stakeholders in the transportation sector to cooperate with the Committee, admonishing road users, particularly drivers to be careful while on the road.

In his remarks, the Federal Road Safety Corps (FRSC) Sector Commander who is also the Secretary of the Committee, Mr. Ahmed Umar, said with the inauguration of the Committee, the state would take its rightful place as a state that has the safety of its people at heart.

He said that Nigeria Road Safety Strategy is a plan to improve safety on the roads in line with global best practice, submitting the action plan would help the country improve on issues relating to road safety, adding that the National Road Safety Advisory Council was first inaugurated in the year 2017 with Vice President Yemi Osinbajo as its chairman.

Other members of the Committee are Commissioners for Transportation, Works and Infrastructure, Health, Justice, Education, Finance, Information and Strategy, Physical Planning and Urban Development, Special Adviser to the Governor on Environment and the representative of the Nigeria Society of Engineers.