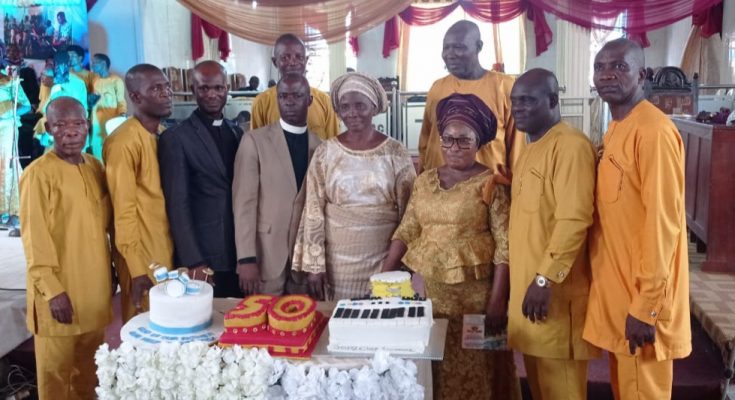 It was celebration of God’s faithfulness and loving kindness on Sunday as the elegantly dressed choir of Christ Apostolic Church, Oke Iyanu, Osinubi Ijebu-Ode rolled out drums to celebrate its golden jubilee anniversary of rendering praises to the Almighty God.

The colourful one week anniversary which featured series of renditions of mountain-moving praises including a praise night and musical concert was eventually rounded up with thanksgiving service and launching of the choir 50th anniversary album.

The beautifully decorated church auditorium was filled to capacity as many choristers past and present as well as other invited choirs and ministers of God came in their large numbers to join other children of God to give God all the glory for truly, His mercies had endured forever over the entire member of the church in the last 50 years.

Sharing the word of God during anniversary thanksgiving service, Elder Theophilus Bidemi Oyesanya highlighted the importance of giving God quality praises because the scripture says God dwelleth in the praises of his people.

Elder Oyesanya has therefore urged people to remain dedicated to praising God because this gives God pleasure and that praise is also another weapon of warfare that righteous living Christians could use to overcome the battle against the enemies.

The man of God congratulated the choristers on the auspicious occasion of their 50th anniversary urging them to remain steadfast and immoveable so that they can eventually on the last days join the saints who daily worship the Lord God Almighty.

Speaking with our Correspondent, the Choir Master, Elder Oluwagbemi David described the 50 years anniversary as celebration of God’s love, faithfulness and mercy over the entire children of God, particularly, the choristers in the last 50 years.

He said, “I thank God for how far He has taken us. Though it has not been a journey without challenges, you would agree it is not easy to administer human being but God’s grace has been so sufficient, all glory to God for this wonderful 50th celebration”.

He stressed further, “choir department generally is a breeding ground for great men and women of God, to God alone be the glory for the successes recorded so far, we now have four albums to our credit, all have been dedicated to the covenant keeping God.

Choristers, irrespective of their callings should be more steadfast, dedicated, obedient and committed to this calling in as much we know that God will reward us accordingly”.