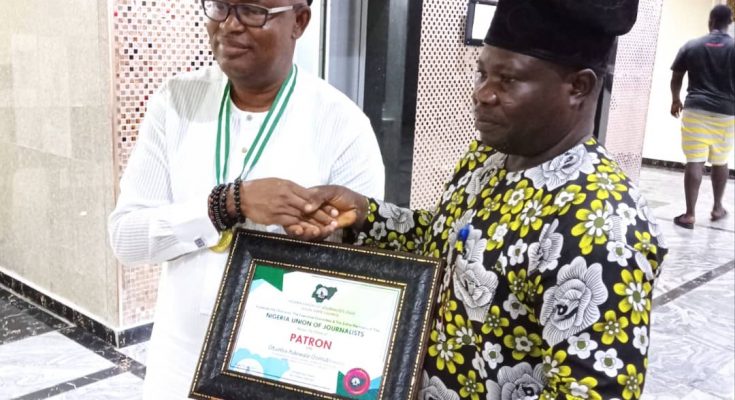 The Ogun State chapter of the Nigeria Union Of Journalists (NUJ) on Monday decorated one of Nigeria Lotto magnates, Otunba Adewale Osinubi, a politician of note and Chief Executive Officer of Wesco Lottery and Bet as one of its patrons.

The Lotto merchant, Osinubi who doubles as Otunba Tayese of Ore Kingdom, Ondo State was said to have been honoured for his commitment towards youth empowerment, media support and for always seeking for improved welfare of the people.

The Chairman of NUJ, Ogun State Council, Comr. Soji Amosu stated this during the presentation of the award at Conference Hotel, Abeokuta, the State capital.

Part of Otunba Wesco’s citation read at the at the event described the business tycoon as as a philanthropist of note, a reputable lawyer and one of the highly successful household names in lottery business in Nigeria.

“Otunba Adewale Osinubi is a mavin in the lottery business. He is an expert or call him a connoisseur with skills that appear to be quite extra-ordinary, its “extra-ordinarious” out of the intrinsic conviction and innate propensity of venting into a lottery business wherein he made it.

“Today, his name has becomes synonymous with lottery in Nigeria. For over 29 years, the mavin has been making tremendous success. The Mavin of Wesco Lottery is particularly admired for his brilliance and charming character which has continued to the pave way for him. But the soft-spoken business guru didn’t have it an easy ride at the beginning”.

This is an inspiring story of awesome significance. The story begins of Otunba Adewale Osinubi who was born in Sapele, Delta State on the 9th of January, 1968 into the family of Late Pa Osinubi of Omu-Ijebu, Odogbolu local government, his mother being from Agbetu compound in Ijebu-Ode; had his primary school at Olua Primary School, Benin in 1974, also attended Edo Kpolor Grammar School (1980-1985) where he bagged his first school leaving certificate; gained admission into the indigenous state owned University (now Olabisi Onabanjo University) and having bagged his B.A Hons in Philosophy served his fatherland at Police College Minna in Niger State.