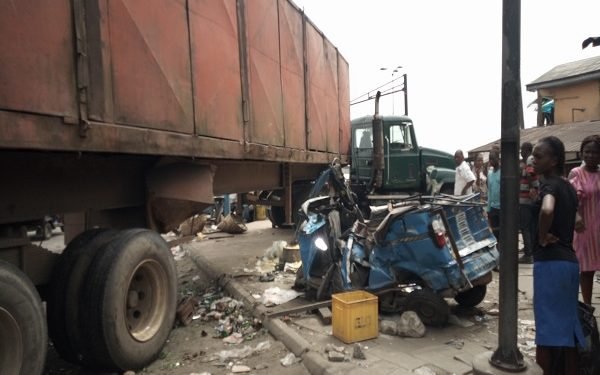 A woman identified simply as Josephine and unidentified tricycle operator were crushed to death by a truck, laden with Nigerian Breweries products at the popular Jakpa Junction in Uvwie council area of Delta state, Monday evening.

The Nation gathered that the incident occurred around 5:30pm, after the trailer veered off the junction to a pavement were some market women displayed their goods, crushing two tricycles in the process.

While the woman, popularly known as Madam 2 o’clock, died on the spot, the tricycle operator reportedly died sometime Monday night.

Several persons, particularly those who sell food items along the pavement, were said to have sustained varying degree of injuries in the accident.

Traders within the area claimed the deceased was trying to buy something when she was knocked down by the trailer.

The driver of the truck reportedly absconded after the accident.

A visit to the scene Tuesday morning saw the two tricycles destroyed beyond repair, broken bottles and some quantity of garri spilled on the ground.

The number plate on the truck, both in front and behind, was conspicuously missing.