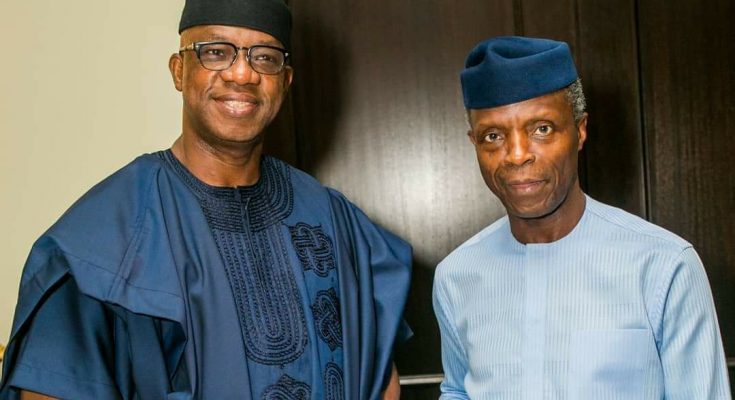 Prince Dapo Abiodun, Ogun State Governor has lauded impactful achievements of many sons and daughters of Ogun State in various fields of human endeavours, including Vice President Yemi Osinbajo, saying he is always filled with pride for the honour of being associated with Nigeria’s Vice President.

Speaking through a letter addressed to the Vice-President tagged, “64 Hearty Cheers to an Enigma with Accomplishments on Many Profits”, Governor Abiodun extolled the virtues and impact achievements of the Senior Advocate of Nigeria to not only his State of birth, but also the Country at large.

He said, “The occasion of your 64th birthday today, 8th March 2021, provides me yet another opportunity to express gratitude to God and convey the very warm felicitations of my family, the Government and good people of Ogun State on your new age. Congratulations, Your Excellency!

“Our dear Ogun State enjoys national and international renown and pre-eminence in diverse sphers of human endeavour. This tradition of excellence and honour has been achieved and sustained over the years through the great and impactful achievements of sons and daughters of the State, among whom you rank top.

The Governor said being the Governor of Ogun State, he is always filled with pride for the honour of being associated with Vice President Osinbajo and being grateful for Osinbajo’s invaluable support in his journey to the Office and even greater support and mentoring he enjoys in the saddle.

He said, “Your (Osinbajo) life is a testimonial to the awesomeness of God and an embodiment of accomplishments that as diverse as they are uncommon, particularity in the life of an individual. In the academic community, you attained the zenith as a Professor at a record age of 33.

“Your admittance to inner bar of your profession as a Senior Advocate of Nigeria was no less phenomenal. And yet on the pulpit, you are unmistakable voice with a persona that weaves precepts and practice into harmony for all to emulate. Our Country continues to benefit from your adroit statesmanship and commitment to the Nigerian project.”