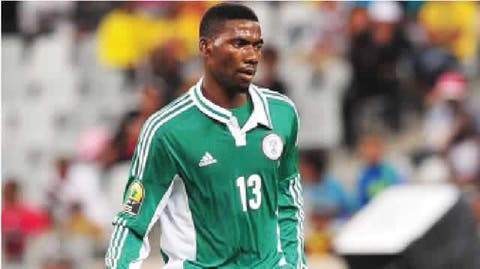 Nigeria international Hilary Ikenna talks about his predicament following four months unpaid salaries by Sunshine Stars, and his determination to seek justice, in this interview with EBENEZER BAJELA

What is the situation on the salaries owed by Sunshine Stars?

We were paid just a month’s salary on Friday afternoon and I know it was because of the Ondo election on Saturday (yesterday). They haven’t said anything about the remaining three months salaries.

How many months’ salaries are you been owed now?

I was owed four months before the league was suspended, and later brought to an end. It means they still owe us three months salaries. Do you know how much debts players had incurred just to survive? I don’t want to talk about the salary anymore, when it comes, it comes.

How have you been coping?

The little I saved before the lockdown was what I’ve managed to sustain myself and my family, until it got finished. And we started eating from hand to mouth and had to beg friends just to survive. That really got me depressed.

What led to you being depressed?

It’s about where I live; my landlord is not someone who understands my current situation. He needs his money or the place be vacated, not minding the pandemic that has affected everybody globally. I was depressed because I had no money to give him and no place to go. So, I turned to friends, who know that I nnormally don’t ask for anything, I asked if they could assist me and I did this through my Whatsapp and social media platforms. Many of them saw the messages and felt my social media platforms had been hacked. I had to explain to them that it was me and they were surprised. A few of them responded. After I was paid the one month salary, I have now paid for a new house and will park in soon, though I still need to balance the agency and agreement fees.

You said you might take this issue to FIFA if it continues, how soon do you intend doing that?

Matters arise when you have issues and there is nobody to sort you out. Then you have to do the needful. I will do what I need to do to get my money. If the people in charge of the league cannot help the players, then we need to look for a way out, but first, I will have to write to the players union and have a copy for myself, FIFA and NFF, so it doesn’t look like I stepped on toes.

Don’t you think FIFA might ban Sunshine if you report them?

I’m going to be realistic, we are all human beings and nobody prays for anybody’s downfall. But when you’re been owed for too long, the next thing to do is to go to court. But the football law doesn’t allow that. But I can go to the Court of Arbitration for Sport. If anything happens to them (Sunshine), it is a lesson, so that you don’t joke with players that are with you and take care of their welfare.

Your contract with Sunshine has expired. Do you want to continue with them?

Everybody wants to play football where he can be happy. I can’t categorically say that I won’t want to stay with them because the coach (Gbenga Ogunbote) that just came in wants me to work with him. I wouldn’t want a situation where he will feel I’ve disappointed him. My fingers are crossed, let’s see what happens and what the plans will be like.

Do you feel ashamed as an NPFL player?

No, I won’t because most of the teams I’ve played for were not all that terrible. Even Sunshine Stars were not like this before. Things were fine with the past management under Mike Idoko and Segun Adagunodo. Players were happy and Sunshine were the first to start paying huge amounts of salaries in the NPFL. I’ve never played football till this time of the year and can’t say, ‘this is what I’ve made in a year.’ This is the worst, but still, I can’t be ashamed to say I’m a player in the Nigerian league. I’ve had good experiences with clubs like Rangers, Lobi Stars. Playing in Kano Pillars was huge and a very good experience for me too.

Why didn’t you mention IfeanyiUbah, one of your ex-clubs?

I don’t like talking about IfeanyiUbah because it wasn’t a good experience for me, its just like what’s happening now with Sunshine. I was owed six months’ salaries there and when I signed a contract abroad, they refused to release my ITC (International Transfer Certificate). That is why I came back and went to Kano Pillars, so that they don’t know how my clearance came about. When I came back I went to Abuja to sort myself out.

Are the home-based Super Eagles treated same way like the league players?

I’ll tell you that the same way the NPFL players are treated is the same way the home-based Eagles are treated, no special treatment for them. The clubs feel they’re helping you by bringing you into the national team or helping you make money and this is affecting the league because there is no professionalism. To tell you the truth, the NPFL is a league where coaches earn more salaries than players. The coaches earn more match bonuses, travelling allowances than the players that are actors in the game. I’m not saying it is a bad thing, but they should look at it, if the players are not there, will coaches and management be there?

What lessons do you think we can learn from the Europeans in managing our league?

A lot, because our football administrators travell to Europe and see how they manage the packages and welfare of the players over there. Here we drink sachet water while training and when the players fall sick, officials complain. This is because there are no supplements provided for the players to build their bodies while training. There is absolutely nothing. We travel and go to school to learn, so, the question is, what are they bringing back from their tour of Europe? Nobody should compare our management to that of Europe because there is nothing to compare. Even some African countries are better than us.

Previous PostCBN to enforce banks’ compliance with SWIFT code Next Post#EndSARS: Over 11,000 sign petition to ban top public officers, IGP, others from US