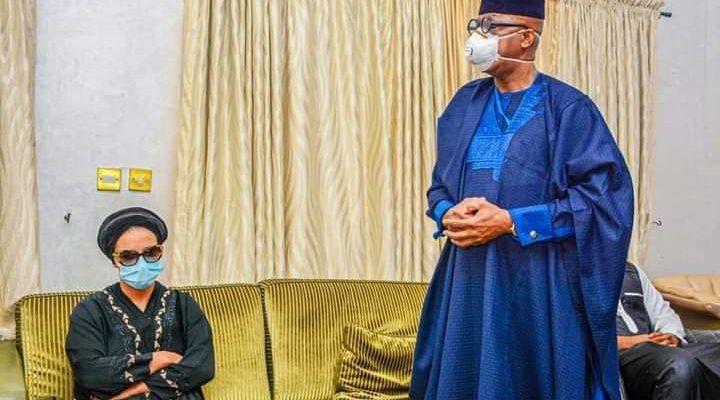 Governor Dapo Abiodun of Ogun State has expressed his condolences to the family of late Senator Buruji Kashamu, who died on Saturday as a result of complications from Covid-19.

Senator Kashamu died at the age of 62 at the First Cardiology Consultants Hospital in Lagos.

Describing the deceased as a very caring and a philanthropic community leader, the Governor said his kind gestures and benevolence acts would be greatly missed by the people.

Governor Abiodun who led other members of the executive council to the country home of the late politician in Oke – Agbo, Ijebu – Igbo area of the State said, “late Senator Buruji Kashamu represented the people of Ogun East at the 8th National Assembly and was a very courageous man who lived for his people”.

The Governor in his words revealed that late Sen. Kashamu was an exceptional politician adding that it is most unfortunate that the cold hands of death has snatched him away at a time his constituents, the State and the nation at large needs him.

“At this trying times, we can only pray that God will grant the wife, children and other family members, the fortitude to bear the irreparable loss, comfort every heavy hearts and put an end to this pandemic”, Governor Abiodun prayed.

In their response, the wife of the deceased and his son, Susan and Rasheed Kashamu appreciated the Governor for the love and the show of respect for the family especially at this mourning time praying that God will continue to lead the Governor right as he steers the affairs of the State.

On his part, Prince Segun Adesegun, a former deputy Governor of the State described the late politician as a good personality and a generous man who won’t only be missed by his own people but the country at large.