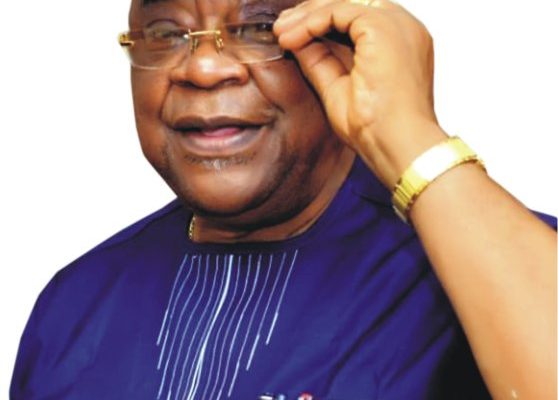 Otunba Alao-Akala: Celebrating An Icon At 70

For Otunba Christopher Adebayo Alao-Akala, all roads lead to the ancient town of Ogbomoso, Oyo State. The former governor of Oyo State who has just clocked 70, deserves a convergence of roses, going by his innumerable contributions to human development. A classic gift for Otunba Alao-Akala on the joy of this occasion should come in the fine colour of “silver”, which is reputed as a septugenarian’s symbol. Give him every other thing you like as a gift but make sure they are wrapped in the “silver” box at 70.

But what does silver colour represent or mean to Alao-Akala at 70 and what does the black colour also mean to him?. Silver is a precious metal and like gold, often symbolises riches and wealth. Silver is believed to be a mirror to the soil, helping us to see ourselves as others see us. As a gemstone, silver represents hope, unconditional love, meditation, mystic visions, tenderness, kindness, sensitivities and a communiator that aids in public speaking and eloquence. Silver is believed to draw negative energy out of the body and replace it with positive energy. Traditionally, gray-haired seniors are viewed as just being old, while the phrase silver-hared traditionally describes a distinguished individual who is aging gracefully. Otunba Adebayo Alao-Akala should be celebrated at 70 for his contributions to the development of the Nigerian nation and Oyo State in particular where he served as Governor of the state between 2006 and 2011.

He was a manure to the soil of citizens who benefited tremendously from his wealth of leadership, and indeed, he led well. He gave hope, and unconditional love that were all embedded in mystic visions, tenderness and kindness, yet sensitive to every need with psychic abilities to impact positively. He also bore the effects of a conductor and communicator, hence he conducted the affairs of the state well and communicated through the media in his special programmes “Epade Gomino”, where citizens could interact with their governor, an opportunity most Oyo citizens are still longing for after many years that Alao-Akala left power.

He demonstrated an amazing eloquence, drawing out the negative energy of anger, bitterness, removing them all and replacing them with positive energy. This was highly revealing in his smile of meritorious and dedicated leadership. Otunba Adebayo Alao-Akala started well, imbued with vision to improve the lot of the masses through the execution of people-oriented projects spanning all facets of life. He gave Ibadan, the state capital a facelift, cleansed it and tidied its environment. Today, Ibadan is among the cleanest cities in Nigeria. He also gave employment to over 3,000 street sweepers, and purchased refuse bins and compact trucks thousands and hundreds. Ibadan now looks cleaner and tidier and has become the citizens’ delight.

The major roads within Ibadan city alone were being dualized beautifully and shaped with lustre architectural design with super monuments. An example is Mapo Hall, which was renovated by the Alao-Akala-led administration. Across Ibadan metropolis, street lights stand out gorgeously, adding to the beauty and glamour of night ride. This has particularly brought out smiles from the lips of the motorists and commuters traffic lights were stationed at specific junctions and roundabouts to enhance the controlling sequence of vehicles, much more to the delight of the motorists who themselves applauded and praised the efforts of the then hardworking Governor. Oke-Ogun, an area of Oyo State is an evidence of one of the places where Alao-Akala wrought wonders in road construction and rehabilitation. Most areas that were never given a taste of asphalt hot new looks. He put in place College of Agriculture in Igbo-Ora as a measure to improve farming and put more food on the table through a wide range of research activities. Alao-Akala values education so much that he gave scholarships to well deserved students with payment of bursary to the tertiary institutions.

His urge to raise the state-owned University to a world class led to the building of LAU-TECH Teaching Hospital and College of Health Science. He did not joke with the security of his people as the chief security officer of the state, hence he purchased Armoured Personnel Carriers and other security needs. Otunba Alao-Akala made significant change in the rural communities through his rural electrification project which was a huge success with transformers being stationed everywhere. Alao-Akala raised N1billion within 8 months in office without putting the masses in unnecessary danger. Artisans and even the common man witnessed a life of no hunger and stavation because he ensured money went into circulation. He saw compensation as quite very important where any structure was damaged, his administration promoted 12 directors who were already due for promotion to perm-secretary, to encourage and reward labour. He purchased buses for the school of Nursing, built structures around the state institutions even in the primaries. He built the Medication Centre at the Ministry of Justice. He equipped the state fire services to a suitable taste which today still speaks in their fight against fire outbreak. As a lover of religion, he promoted religious tolerance across Oyo State and even funded religious institutions and was accorded his due respect by both the Islamic and the Christian communities.

He loved the poor, the downtrodden in the society and sincerely showed them affection. In this wise, he demonstrated a warm embrace. He was never disconnected from his people once. Otunba Adebayo Alao-Akala demands much accolades, encomiums and panegyrics from all and sundry at his 70th birthday for this good deeds. We wish a leader with a large heart for his people long life and prosperity.

– Published in Nigeria by The Issues Magazine Vol 6 No 40