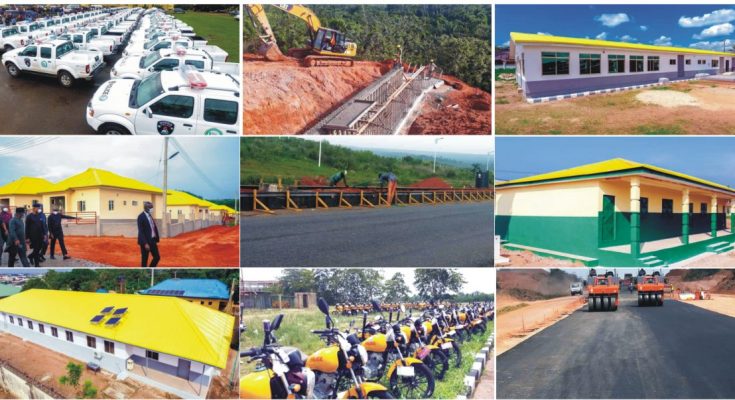 Governor Dapo Abiodun, it would seem, came into the governance of Ogun State like a matador, bent on wrestling the bull of socio-economic decay, especially in the rural communities. In terms of physical achievements, Abiodun anchors his socio-economic transformation plans on ‘Building the Future Together’. Days after he was sworn in as Governor, he undertook a tour of the 236 wards across the state, to ascertain the condition of the roads, and what he saw was not pleasurable to him. The government, in no time, ordered work to begin with a view to making roads across the state accessible, despite the meagre financial resources at the its disposal.

To also save cost, Abiodun initiated the signing of the Ogun State Road Maintenance Agency (OGPWA) Amendment Bill into law, which ultimately paved the way for the creation of Ogun State Public Works Agency (OGPWA), and thus began massive road rehabilitation and construction in all the nooks and crannies of the state. “The OGPWA is today present and visible in different parts of our dear state, working round the clock to fix roads. “The establishment of the OGPWA is part of our commitment to accelerate massive road rehabilitation towards enhancing job creation, poverty alleviation, food security, opening up of locked areas for development and generally, easing commuting and movement of goods and materials; it thereby ensures the continued infrastructure growth for the economy of our dear state,” he said. Abiodun also noted, “Opening up our rural roads, in particular, will boost agriculture and development of Micro, Small and Medium Enterprises. We have also identified our industrial hubs of Agbara-Atan-Ota axis, Ewekoro-Ifo axis, and Sagamu-Ogijo axis, for special attentions. We are as well exploiting our proximity to Lagos and, in this regard, we have entered into some key joint initiatives with the Lagos State Government. Although the Epe/Ijebu-Ode and Sagamu/Abeokuta roads built during the administration of Gbenga Daniel are federal roads, Abiodun has, nonetheless, rehabilitated them in partnership with the private sector, in his efforts to open up the state to ease business and movement of people. Among the roads currently being rehabilitated are Itoikin-Ibefun-Ijebu Ode road, Iperu-Ilisan road, Sango-Ojodu Abiodun road, Ilaro-Owode road, Abeokuta-Sango-Ota-Lagos road, Osi-Ota-Awolowo-Navy-Kola road, and Balogun Kuku road in Ijebu-Ode.
The reconstruction of Opako Bridge in Adigbe, Abeokuta and many other township roads is ongoing, while the long-abandoned 32-kilometre Akute-Ajuwon-Alagbole, Owode-Ilaro road has been earmarked for constructions, although it is supposed be a joint effort by the governments of both Ogun and Lagos States. So far, Ogun State can be described as a huge ground of road construction and rehabilitation, many observers told The ISSUES Magazine. In the last one year, a total of 50 roads have been completed in the three senatorial districts, with two of them fitted with lights. There are also 19 ongoing road projects across the state, firmly confirming Prince Abiodun’s ‘accessibility’ principle.

Newly constructed or rehabilitated roads have also not been allowed to rot. The duo of Commissioner for Works, Engr. Ade Akinsanya, and Consultant in charge of OGPWA, Arch. Gbenga Akintola, have brought their experience to bear in repositioning the agency, with its presence felt in the three senatorial districts. For effective turn-around, the agency divided the state into six zones as follows: Ijebu-Ode, Sagamu, Abeokuta Central, Ilaro, Ifo and Ota-all managed by six regional well-tested engineers who report directly to two directors, one of who is in charge of Ijebu-Ode and Sagamu zones while the other superintends the Abeokuta Central, Ilaro, Ifo and Ota zones. In the health sector too, Abiodun, findings have shown, has made astounding impacts, especially at this period that the Nigerian health management is dazed by the spread of deadly Coronavirus. At a recent meeting, Abiodun unfolded how he would build one primary health care centre in each of the 236 wards of the state, using local manpower. Meanwhile, in the wake of COVID-19, the Ogun State Government announced, in line with the Federal Government directive, a total lockdown for 14 days. But this was quickly modified where the strategic component of the management of the pandemic was introduced to cater to the nature of man, while combating the virus. In this regard therefore, the governor announced a shift in the date of commencement of the lockdown from March 29, 2020, to April 4, to give the people the opportunity to prepare for the unusual social condition of having to stay at home involuntarily.

This became a relief as it actually gave Ogun State’s residents opportunity to prepare on all fronts-psychologically, socially and economically. The change of date of commencement of the lockdown was a product of strategic management on the part of Abiodun, sociopolitical observers also remarked. The shift enabled the government to strategically set the objective of the lockdown, taking into consideration, the need to see how the spread of the deadly disease could be arrested; the level of resources needed to bring succour to the people who are locked down at home. through palliatives, and the need to think outside the box on how to generate money as the Coronavirus disruption would impatient global economies. Besides, Abiodun did the unusual buy going ahead to set up a module laboratory at the Olabisi Onabanjo University Teaching Hospital, Shagamu, aimed at effectively diagnosing and treating victims of the disease. Besides, the governor gave an every-other-day relaxation of the lockdown to ease off its biting effects. Also, in the area of education, Abiodun explained that he would rehabilitate 236 primary schools, one in each of every ward in the state, and set up a job portal for his administration to have accurate statistics of skilled and unskilled labour in the state. He has also begun similar lofty programmed in the secondary and tertiary categories. The governor, who had lauded the spirit of magnanimity displayed since the party won the March 9 governorship election, also assured the people that all his developmental programmes as enshrined in the party manifestoes were on course. He said he had put in place, a portal to register on a continuous basis, unemployed youths in the state, with a view to providing them jobs suitable for their trades and academic qualifications. “We shall be public-private sector oriented in our governance model, and we are going to have an inclusive government that will utilize valuable potentials that abound in the state, irrespective of party affiliations. All graduates and those with vocational training across the state will give their information and we will endeavour to match them with potential employers, not only within the civil service but also with the private sector, with whom we are partnering”, he stated. To ensure that the citizens and other residents of the states are not short-changed, he said, “We will send a local content bill for legislative action, such that investors will first look inwards for availability of workers in Ogun State and make our youths their primary catchment area when they site their companies here”.

Already, Governor Abiodun has put in place, a consultative forum that is community-based, to advise government on projects deserving urgent attend, in order of priority. The consultative meeting which met recently, agreed on the operationalisation of the Governor’s food security agenda in which he promised to engage 10,000 farmers to be supported for mechanised farming, with attendant value-chain benefits to make agribusiness the bedrock of his administration’s plan to lift people out of poverty. Looking backwards, however, many had thought Abiodun was out on a wild goose chase in his quiet but determined governorship ambition. This was at a time the sitting governor, Senator Ibikunle Amosun, had endorsed House of Reps member, Adekunle Akinlade, to become his successor. Ordinarily, Abiodun’s political ambition would have been wished off as a day dream, but that was not to be. Strong political forces that were averse to Amosun’s style of politicking soon rallied round him, assuring the reticent politician from Iperu-Remo of their full support, in getting the governorship ticket of the APC. Those who rallied round Abiodun at the period include Vice-President Yemi Osibajo, the APC National Leader, Asiwaju Bola Tinubu; and former Ogun governors, Aremo Segun Osoba and Gbenga Daniel, respectively. Riding the storm of the crisis, Abiodun’s strong political hue soon forced Akinlade out of the party, as he went to the Allied People’s Movement (APM), hoping to realise his ambition there. In the long run, Abiodun picked the APC ticket, and consequently galloped to electoral victory at the general election. But having obtained power, Abiodun was faced with two challenges, namely, working out a truce with his political rivals, and setting to execute own projects, so as to make a clear mark. Using what observers described as hi-tech diplomacy, Abiodun first spread the olive branch to Gboyega Nasir Isiaka, popularly known as GNI, a fellow contestant, making the latter to dump his party, the African Democratic Congress (ADC), for the APC. Rationalising why he joined the APC and indubitably the Dapo Abiodun team, an enthralled GNI had said during his defection rally in Abeokuta, “We are very confident because the morning shows the night, especially with what we have seen in five months.

“If we had not seen positive signs, we probably would not have graduated our relationship. I have come with the leadership of my political structure all across the state. This is to signify the fact that we are very confident and happy with the way government is going about putting the state on a greater scale,” he said. On own part too, barely three months after GNI joined the Dapo Abiodun team, Akinlade too took a cue, but not before he had failed at the Supreme Court in his bid to unseat Abiodun. Explaining why he finally returned to the APC, the Imeko-born politician explained that there were positive developments between his group and the state chapter of the APC, adding that it was not for him to disclose what really results in the rapprochements.

Akinlade said, “APM was a platform to actualise our mandate. We have gained consciousness that we can never lose election again in Ogun State. But I have learnt a lot of lessons.” Assuring his ex-political foes who had defected to the APC of equal treatment, however, Governor Abiodun said, “We still have some positions in place for those that joined us; everyone should have a sense of belonging. I greet you all from Ogun East, West and Central senatorial districts. “There should be no discrimination, we should start ward meetings, politics have started, we are going to join hands to build the future of Ogun together. We are all one and the same,” Abiodun had enthused, while welcoming Akinlade back to APC.