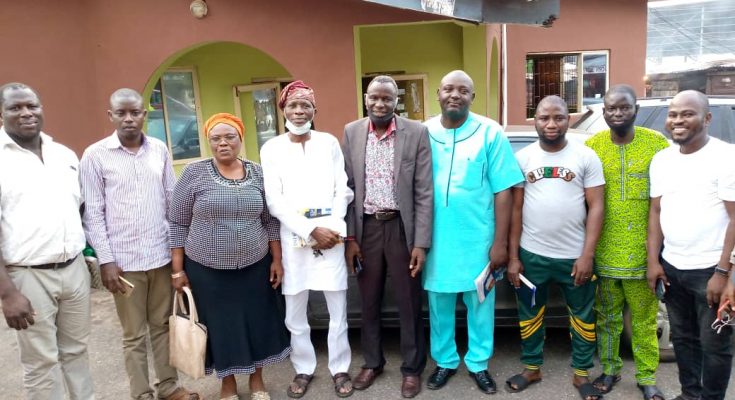 ABEOKUTA — The members of the Federated Chapel, Nigeria Union of Journalists, Ogun State Council on Monday dissolved its exco and set up a caretaker committee that will conduct fresh election for the chapel.

THE ENCOUNTER NEWS reports that, the Adeniyi Adeloye three years tenure had expired since April, 2020, but the outgone exco failed to inaugurate electoral committee a month before the expiration of its tenure which forced members to called for an emergency Congress on Monday.

It would be recalled that, members had insisted on using the national screened accredited list of members for the long overdue election, but the Niyi Adeloye exco insisted on fielding unaccredited journalists for the election, a development which did not augur well with members of the chapel.

The Congress had in attendance the National Vice President B Zone, Comrade Cosmos Oni and the Zonal Secretary, Comrade Gbolagute and members of Ogun NUJ Caretaker Committee with seventeen members of the chapel.

According to the communique issued at the end of the Congress, the zonal leaders said they were carrying out the directives of the national body in calling for the meeting.

Speaking with journalists shortly after congress, the zonal Vice President, Comrade Cosmas Olalekan Oni said the meeting was not to screen any member, but to inform the chapel that it was the duty of the state council to conduct chapel elections.

Comrade Oni said the National secretariat had mandated the zonal leadership to broker peace to the lingering crisis affecting the chapel.

He said the chapel members have acted in consonance with the Union’s constitution by dissolving the expired exco and inaugurated the caretaker committee which doubles as the electoral committee.

Similarly, in a communiqué issued at the end of the congress, members of the chapel nominated the trio of Mr. Dada Olaonipekun, Mr. Solomon Fagbohungbe, and Sodiq Ojuroungbe as the caretaker committee members.

The communiqué said the caretaker committee should organize a credible election within the next two weeks.

The communiqué insisted that the already existing screened list of members as agreed by SEC should be used for the election.

The zonal Vice President therefore commended the maturity of members that attended the meeting and urged everybody to cooporate with the caretaker committee to move the chapel forward.