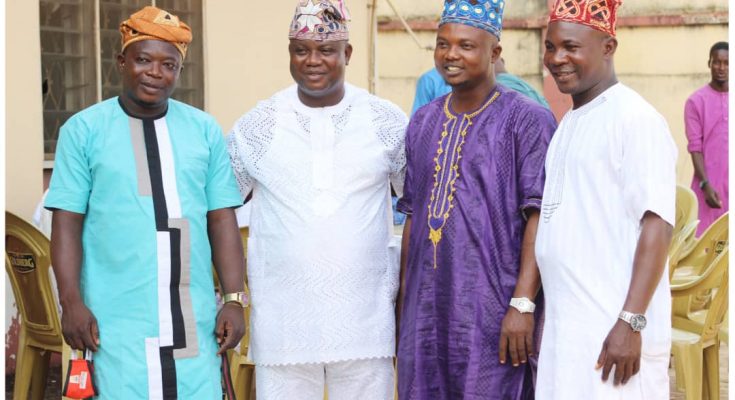 One of the leading upcoming Age-Groups in Ijebu known as Regberegbe has honoured one Oluwatobi Ibraheem Obabi, the chief executive officer of Obatob Properties Limited.

The newly upcoming age group with its age grade between 83-85 was said to have considered Ibrahim Obabi for his moral and financial supports to the development to the group.

Speaking with journalists, the group’s cordinator, Wasiu Shebe noted that Ibrahim Obabi was among the first set of the group who served as secretary before the dissolution of the former Exco; saying, he was honoured for the crucial role he played during the formation of the group.

“This is as result of the services he rendered, it was a crucial role he played during the formation of our group”, he said.

Speaking more with the celebrant, Obabi Ibraheem who was fully overwhelmed for the honour given to him for his noble services to the group could not but express his heartfelt appreciation.

Obabi said, “I am very overwhelmed by the honour bestowed on me by this age group, in its quest to bring peaceful coession, development among respective members even within their respective society. This is highly rewarding for me as member of this noble group as I did not make the wrong choice of investing my time, energy”.

“I can’t do without appreciating our royal father, HRM Oba Adetona for his foresight in the engagement of our cultural heritage, initiative that has come to enhance annual Ojude-Oba festival”, he asserted.

In his remarks, Obabi further said, “However as it stands, all procedures for the recognition and royal blessing from our referred monarch are being put in place, very soon, we shall get to our promise land”.

It was a gathering that showcased the personalities of prominent members of the group from the secretary, Ag coordinator to its public relation officer among others.