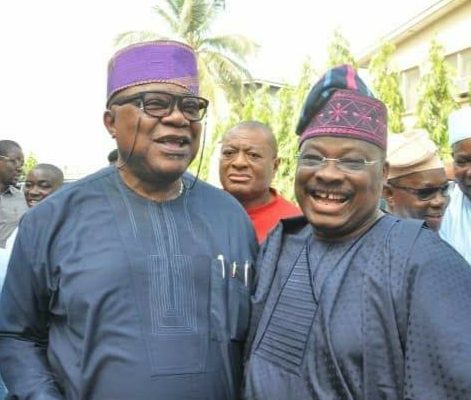 Former Governor and Chairman of the Reconciliation Committee of Oyo State All Progressives Congress (APC), Otunba Adebayo Alao-Akala, has mourned the demise of the late former Governor Abiola Ajimobi. He said the late Ajimobi gave him a mandate, which must be delivered by the reconciliation committee.

Alao-Akala, in a statement issued on Friday, described the late Deputy National Chairman (South) and Acting Chairman of the ruling APC as a man of many accomplishments.

“Kemi and I are deeply saddened. Senator Abiola Ajimobi was a man of principle who championed truth, justice and kindness. He was a brother, friend and political associate; a passionate public administrator and a powerful voice of moral conscience who served Oyo State and his country for decades with dignity and integrity. I’m blessed to have known him. He was indeed my worthy successor!”

“We have lost a giant! My brother, Ajimobi, was a fearless leader, a protector of democracy, and a fighter for the people of Yoruba nation. Our world is dimmer without him in it”.

“He was a politician of high repute and immense clout. All his life, he defined his politics and pitted his tent early in life with the progressive school. I’m comforted in the fact he left behind enduring legacies for the people of Oyo State to enjoy for generations”.

“Senator Ajimobi was a clear-headed and objective political leader who trusted and honoured me with an appointment to Chair Oyo State APC Reconciliation committee. Late Ajimobi’s decision to setup the reconciliation committee was informed by his desperation to see a United APC. Sadly, he didn’t live to see that. It’s my solemn pledge that the committee shall deliver on the desired mandate of the late Deputy National Chairman (South) and Acting Chairman of our great party. By God’s Grace, we’ll not only ensure a united APC but also dedicate our future landslide electoral victories to the departed great leader”.

“My solemn condolences to his wife, Chief (Mrs.) Florence Ajimobi, his children, the APC family and the people of Oyo State. Biola’s strength, passion, unique style of leadership, work rate and voice on so many fronts will be very hard, if not impossible, to replace!”

“May Almighty Allah comfort us in this difficult moment. May He Grant His Excellency Isiaq Abiola Ajimobi Al-Jannah Fridauz. Amin. Good night my wonderful egbon!” the statement concluded.