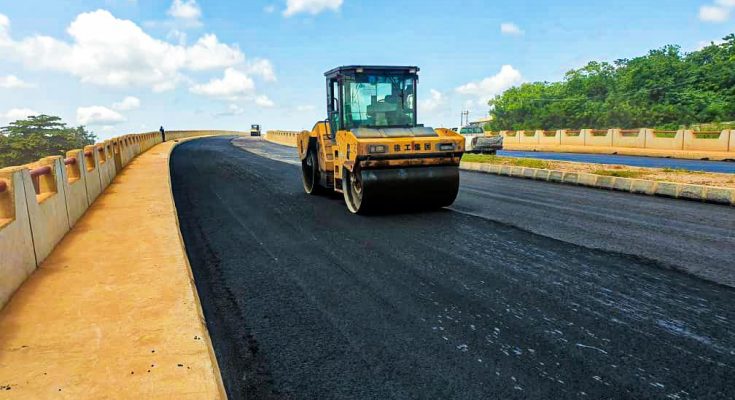 The current Administration of the Ogun State Government, under the leadership of Prince Dapo Abiodun, MFR has recommenced the construction project on Kuto Bridge and the surrounding road. It would be recalled that the road project was left uncompleted by the immediate past administration, under the most controversial circumstances.

Governor Abiodun disclosed that the State Government was only able to continue the project starting with asphalt laying, following series of deliberations with the contractors who had sought variation and additional payment. The re-evaluation and rescoping, according to the Governor, yielded an agreement to complete the uncompleted project.

When the Administration of Governor Abiodun came on board in May 2019, the Governor had pledged that all projects left uncompleted or abandoned by the immediate past administration would be completed or put to better utilitarian use.

So far, the Government has completed parts of a hospital, the construction of which the past administration abandoned halfway, despite claims that a staggering 7 billion Naira had been spent on the project. Other interventions by the incumbent Government include the completion and conversion of some abandoned Model Schools constructed by the past administration, into COVID-19 testing centres and a ICT hub.

These are in line with the position of Governor Abiodun to always work for the common interest of the good people of Ogun State and not politicise any project on which taxpayers’ funds have been expended. According to the truism that government is a continuum, the Governor has proven to take the baton from the preceding racer with his eye on the finish line.

In furtherance of the #BuildingOurFutureTogether Agenda, the Ogun State Government has announced that it is currently in talks with contractors in charge of other uncompleted or abandoned projects, towards completing them and delivering quality projects to the good people of the State.

In the same vein, the Commissioner for Works and Infrastructure, Engr. Ade Akinsanya in his revelation during inspection of some ongoing construction of roads and flyovers in Abeokuta noted that government had release funds to expedite action in executing the numerous abandoned projects across the state.

He said, “let me categorically point out that the Prince Dapo Abiodun administration has released funds to ensure speedy conclusion of all abandon projects by the previous administration. It is alarming that most of these projects have been awarded since 2012 and 2013”.

However, the Project Manager, China Civil Engineering Construction Company (CCECC), Engr. Sewell Zhao, said release of the needed fund was timely, as it would fast track the completion of the projects, thereby relieving the stress of motorists, commuters and other road users.

In their separate remarks, some motorists, traders and other road users applauded the intervention, saying the road constructions, when fully completed would ease traffic in the State.