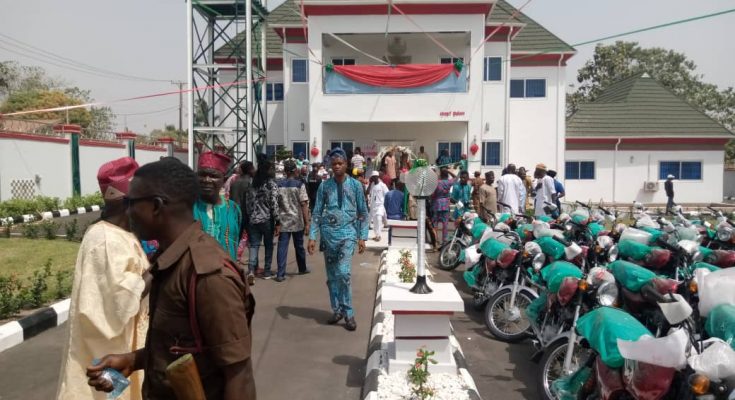 …Gives Out Empowerment Goods Worth N20miliion To Community Members

As part of his humanitarian gestures, Mr. Tunde Aremu, Chairman Irorun Agbe Farm booster situated at Ogbomoso area of Oyo State has given back to the masses, goods worth N20million as he also dedicated a multimillion mansion.

Mr. Tunde Aremu, an entrepreneur who specializes in Agro Chemical Business, said he gave thanks to God for his blessings and do decided to empower the masses and the less privileged.

“I decided to give back to humanity part of what is has pleased God to do for me and that is why I have decided to give out these items – fifty motorcycles, generators and refrigerators all worth N20million naira in all”.

“I can’t be driving car worth of N20M while some people are struggling to feed their families. That was the reason why I decided to give the money back to empower the masses”.

“I deeply appreciate my creator who gave me an opportunity to serve my people. I never knew I could become anything in life. I originally thought of buying a N20million exotic car to commemorate the house warming, but what is my gain if others are struggling to feed their families?, Aremu asked.

While speaking at the event, the former governor of Oyo State Otunba Adebayo Alao-Akala affirmed that he was not surprised as this was not the first time for Tunde Aremu to empowering the less privileged in the society our society. Akala maintained that the society needs people like Mr. Tunde Aremu to eradicate poverty as he charged the beneficiaries to use those gifts judiciously.

The guests were well entertained by the fuji icon, King Wasiu Ayinde, K1 D Ultimate, the Mayegun of Yorubaland and Ajobiewe Aremu who gave well-wishers the best of entertainment.