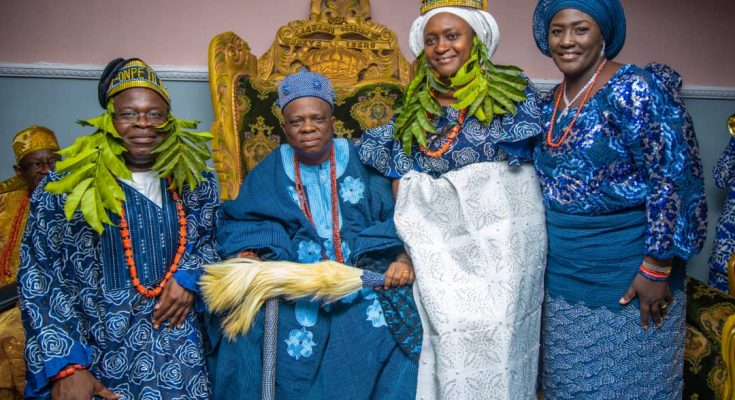 It was all gaiety, splendour, candour and royalty as the Onpetu of Ijeru Kingdom in Ogbomoso South, Oba Sunday Oyediran, Lagbami Osekun III celebrated his 20th coronation anniversary.

It was all dancing and smiles from the amiable monarch showing appreciation to the Almighty God for the showers of blessings on him, family and the entire Ijeru Kingdom. Decked in full traditional attire – royal regalia – Oba Oyediran stepped out elegantly alongside his beautiful Olori, Esther Oyediran to celebrate.

The monarch and his Olori was accompanied by the retinue of Chiefs and well-wishers to the venue of the colourful event as people showered praises and panegyrics on him.

The 20th coronation anniversary was celebrated in a colourful way, as Ijeru Kingdom was agog with the old and young, males and females all in uniform attire “Aso Ebi ” set aside their differences to celebrate the humble and great monarch, as they dance to the traditional songs dished out by Ojo Oluwatana and Gospel music delivered by Bosede Adeiwa, exchanging greeting and paying royal homage to the King.

The event also witnessed the installation of the Chief Executive Officer of Ilaji Farms, Engineer Dotun Sanusi and his wife, as the Aare Atayese and Yeye Aare Atayese of Ijeruland respectively.

Speaking at the epoch event, the celebrant, Oba Oyediran, gave thanks to God for giving him the opportunity to celebrate the occasion. He however recapped some of his achievements which included infrastructural development in Ijeru Kingdom, human and capacity building, Youth empowerment programmes and a documentary on Tokuloje, just to mention a few.

Oba Oyediran then used the occasion to announce that he will establish a center for youth development to develop young talents and to build a rewarding career for the youths of Ijeru Kingdom in order to offer them to have a glorious future.

He however advised the Oyo State government to establish Oyo Council of State whereby the former governors and schools of thought in the state will meet to give advice to the government for rapid development of Oyo State.

So also were representatives of Christian Association of Nigeria, ably led by the president’s wife, Mrs Supo Ayokunle and League of Imams in Ogbomoso South, among others.