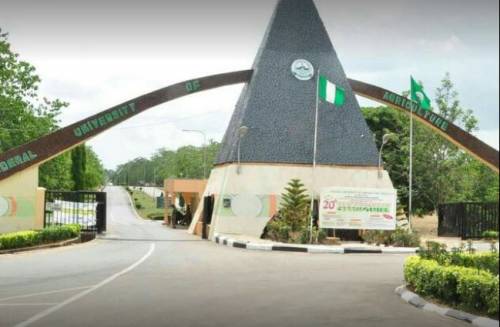 Ogun Expressway Was Blocked By Hoodlums, Not FUNAAB Students – VC

At the early hours of Thursday, non-students of Federal University of Agriculture Abeokuta FUNAAB attempted blocking the Camp – Alabata road, trying to cause mayhem by disturbing the peace of the community.

The students who claimed to be students of FUNAAB were later found not to be students of the school. The leader of the gang, Asipade Sukanmi Olayiwola, 21 years old who was later found to be a fraudster popularly known as “yahoo yahoo boys”. When debriefed by the police and searched,, he was found with several charms of different grades in his room located in a private hostel, distinctly isolated in a bush located in a an interior part of Oluwo Keesin (a village within Alabata community in Abeokuta).

When Falcon Times visited the scene of the reported robbery, it was discovered that the students who claimed that robbery took place and some Phones and other items were stolen refused the intervention of the police. The complainants refused to write statements for the police after inviting the DPO of Harmony Police Station and the Chief Security Officer of the Police. They claimed that the phones stolen from them had no receipts. Thereafter, they went ahead to block Camp-Alabata road very early in the morning on account of this acclaimed robbery incidence. At this point, the police had no option, than to arrest them for breach of community peace. This was when it dawned on everyone that the ring-leaders were not students of FUNAAB. It was suspected that they were sponsored to cause mayhem on that particular day using the robbery claim as an alibi.

According to our findings at the scene of the reported robbery, in the private isolated hostel in a bush, with the Chief Security Officer and the police, a withdrawn student of FUNAAB had his room in the private hostel searched. From what he said on audio and video, he is Aremu Emmanuel, 20 years old who claimed to know nothing on the mayhem perpetrated by his friends. However, different types of charms, herbal powder bbelieved to be for bullet-proof and Indian hemp residues were found in his possession. When asked about the use of the charms, he claimed to be a member of OPC.

FUNAAB students union press release stated that the aclaimed robbery incidents outside the school premises was staged to cause trouble and create confusion among the students.

“The *Students’ Union*, a conglomerate of articulate, vibrant and quintessential students that are dedicated to the protection, defense and advocacy of students interest hereby uses this medium to disclaim with clear intent, the recent claims of incessant *ROBBERY ATTACKS* at the off campus location around the University environment.

Numerous media houses such as the *SAHARA REPORTERS* and personnels, have been perpetrating false news of robbery incidence around the University environment in recent times. It’s essential to categorically disclaim that there was no case of robbery whatsoever in Kofesu area on Thursday, 31st October, 2019.

It’s also very important to note that the Management of the University has directed that every concerned students affected by robbery o harassment by security opperatives should report to the University Security Unit and the Student Affairs Division for registration of reports of such incidence.

We implore all FUNAABites to stay calm, remain security concious and avoid spreading of false and unconfirmed information, as doing so will bring the University to a huge and gross disrepute”

The Vice Chancellor of the school, Professor Kolawole Salako on phone conversation said “this was how they started during the time of my predessesor, Professor Olushola Oyewole, we never taught it was a plan to destabilise the school academic functions until it escalated to what it turned to, they have started again”