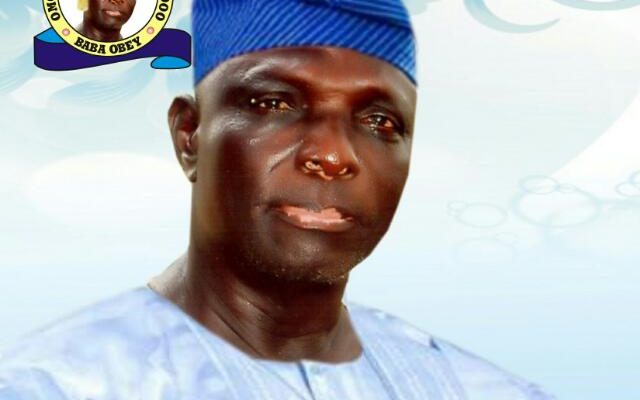 Otunba Obey Akinlaja (JP) wrought wonders in Awa-Ijebu where he celebrated a year remembrance of his father which coincided with the posthumous 75th birthday.

The event was attended by notable dignitaries.

It was no news that Otunba Akinlaja took after his father whom he described as a father to all since he believed his father’s relationship with people cut across all boarders.

According to him, Chief Samuel Olufunmiso Akanni Akinlaja was a detribalised man. The man who died on the 22nd of March, 2016 few months to his 75th birthday and had urged his son to celebrate it the same way his burial would have been celebrated, where guests at the burial would be entertained by the Juju legend, Ebenezer Obey Fabiyi.

But, unfortunately for the Late Chief Samuel Akinlaja, he couldn’t make 75 on the planet.

So, the 75th birthday collided with his 1st year remembrance and that was recently celebrated in a grand style.

Chief Samuel Olufunmiso Akanni was born on 7th of September, 1942 into the family of Lay-Reader Pa. Samson Onakoya Akinlaja (Baba Lalupon) and Madam Felicia Fadekemi Akinlaja (nee Agbo Idowu). He was nicknamed Baba Obey in his later years having grown up into a responsible adult yet in a very humble circumstance.

What would you expect of a young boy then who had a very minimal interaction with his mother who died when he was of tender age?

Samuel Akinlaja’s father, Pa Samuel Akinlaja who was a goldsmith in Lalupon took up the responsibility of sending his son to school. He had his elementary education at St. John Anglican Primary School, Lalupon in Oyo State between 1948 and 1958.

He later attended Itamerin Modern School between 1959 and 1961. He then proceeded to Government Technical College, Ijebu-Ode between 1965 and 1968. He went further to the famous Government Staff Development Centre, Sokoto between 1969 and 1970 to complete and actualize his technical competencies.

His career spanned across the teaching profession from Naiwar-ud-deen School in Iju-Otta between 1962 and 1963.

He was a senior member of Costain furniture, Apapa Lagos in 1968. He worked in the provincial office in Sokoto state in 1969 and in Governor’s office, state House, Sokoto between 1970 and 1975.

He served as a pioneer staff member of Ogun State University, now Olabisi Onabanjo University, Ago Iwoye between 1983 and 2008.

Chief Samuel Akinlaja was a devout Christian who served his community. He was married to his dear wife, Mrs. Alice Iyabosola Akinlaja and the marriage was blessed with children and grandchildren.

He took interest in solving people’s problems. Otunba Obey Akinlaja JP was very happy that he succeeded his father as he claimed that he was his favourite and said what other siblings couldn’t say about his father.

The closeness between him and his father was the reason his father had to call him while nearing death, to help him look after his mother and handed over his house to him.

Otunba Obey Akinlaja rightly fit into his father’s shoe knowing fully well that he’s fit to carry on and look at the possessions of his father.

Otunba Obey Akinlaja turned to the entire family to admonish them to follow the patriarch’s footstep in the area of religious commitment, community development, academic development and social enhancement as his father stood as a pillar within the community, the church and school environment.

He eulogized his late Dad as a mover, shaker of anywhere he was and that was why his presence was felt by all and sundry, wherever he was, he gave charitably.

Speaking with our correspondent, Otunba Akinlaja lamented that “man proposes, God disposes, as he expressed pains that, “my father’s intention was to celebrate his 75th birthday and see how his burial would be and that was the decision he took but as he proposes, God rules it out, he died on the 22nd of March, 2016 few months away from his 75th birthday.

“And based on the agreement we had (my dad and I) that if he’s able to clock 75, we should celebrate it, the same way his burial will look like, because he actually said he wants to witness how his burial would look like.

“The closeness between my father and I prove it that I can fit in and his last words before he passed on was that “Obey I am going, and I am handling over my house to you”. This is not just mere say, he actually said it in the presence of my mother and he handed over my mother to me.

“If you check the statement proverbially, the man has actually put me into his shoes knowing full well that I am fit enough to carry on from where he stopped and that’s why you see the high and mighty, dealers, top government functionaries were all here far and near to celebrate him.

“If he’s alive too, they will also be here, so coming here means I could try the little I can.”

While extending his goodwill message to the family his father left behind, Otunba Akinlaja urged the family to follow the footstep of his father in the area of community development, academic development, social enhancement, church activities among others.

He said, “My father stands as a pillar within the community, the church, school environment to mention a few, my Daddy has been a mover, shaker of anywhere he is and his presence was always felt by all and sundry”.

“Whenever he is available, he donates the little he has, he doesn’t joke with donation, sometimes he will tell people not to donate, and that he can do it although it will fall back on me, that he has promised to do this, so it’s I and him to make sure it’s done and I will concur because he is a man of his words.”

Previous PostEkiti 2018: Battle Gets Tougher On Gubernatorial Race Kolapo, Adeyeye, Oni In The War Of Attrition Next PostIt's an adherence to the culture of my fatherland to be polygamous - Osinubi