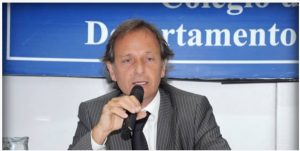 A former Argentine football official identified as Jorge Delhon committed suicide on Tuesday, the same day he was accused of bribe-taking in the FIFA corruption trial that opened in New York this week, Argentine media reported.

According to reports the deceased threw himself under a train in a Buenos Aires suburb on Tuesday.

A sports marketing executive, Alejandro Burzaco, testified Tuesday that Delhon and another man, Pablo Paladino, took in millions of dollars in bribes in exchange for rights to broadcast football games, according to the reports.

The reports said that at the time the two men worked for Football for All, a government program under former president Cristina Kirchner that held the rights to football broadcasts in Argentina.

Burzaco, the former chairman of Torneos y Competencias S.A., detailed in US federal court in New York how his company paid millions of dollars in bribes to South American Football Confederation (CONMEBOL) executives for more than a decade to secure television rights to major tournaments.

Burzaco, who pleaded guilty in November 2015 to racketeering, wire fraud and money laundering conspiracies, is one of 42 officials and marketing executives indicted in the FIFA scandal.