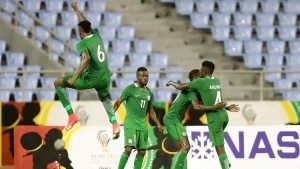 The home-based Super Eagles confirmed qualification for the semi-final of the ongoing WAFU Cup of Nations after defeating the Black Stars of Ghana 2-0 in a must win match for the Salisu Yusuf led team.

It did not start so well for the homed based Eagles as they fired blanks all through the first half while Guinea were already a goal up in the other game against Mali.

Things, however, took shape as the Eagles scored two goals in the first 10 minutes of the second half to seal the three points that take them to the semi-final.

Anthony Okpotu broke the deadlock in the 52nd minute before Peter Eneji doubled the advantage for Nigeria.

Despite the loss, Ghana still finished above Nigeria in Group A with six points while Nigeria recorded five points from their three group games.