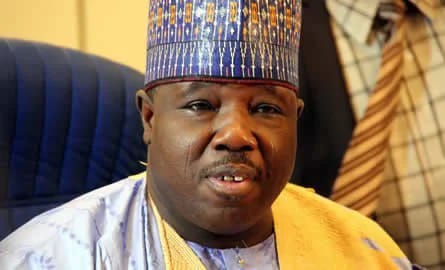 The embattled national chairman of the Peoples Democratic Party (PDP) has vowed to move against the attorney general of Borno state Kaka Lawan for statements made against him.

Speaking to journalists in Abuja, the spokesperson for the PDP national chairman Inuwa Bwalla said Sheriff is set to institute a N10 billion libel suit against the attorney general.

Bwalla said the Borno state government will be joined as party to the suit.

He also said that Sheriff has demanded an immediate retraction of the statement by the Borno state attorney general.

Bwalla said: “The national chairman of the Peoples Democratic Party (PDP) Senator Ali Modu Sheriff has demanded for the immediate retraction of and apology from the attorney general and commissioner of justice in Borno state, Kaka Shehu, over statements credited to him during the Nigerian Bar Association (NBA) conference in Port Harcourt, to the effect that he accused Sheriff of being the mastermind of the Boko Haram sect.”

On Tuesday, August 23, while speaking at the Nigerian Bar Association conference in Port Harcourt, Rivers state, the attorney general of Borno state accused Sheriff, also a former governor of Borno state of masterminding Boko Haram activities in the north east.

Lawan in his allegation said many Nigerians will be pleased to see Sheriff arrested and prosecuted.

He said Sheriff sponsored and encouraged the spread of the Islamic terrorist group which metamorphosed into Boko Haram.

But in response, Sheriff’s spokesperson said the statement that his principal sponsored Boko haram group is not new.

Bwalla said the attorney general’s statement is a reflection of the position of the Borno state government and cannot be taken lightly.

He added that the former governor is one of the greatest victims of Boko Haram activities in the region with four of his siblings killed by the terror group and a death sentence hanging on his head from the group.

He further challenged Nigerian security agencies to investigate the group’s history stating that it is funny how someone who toiled all through his tenure to ensure that the group did not thrive can be accused of being a founder of the dreaded sect.

Meanwhile some northern youth have alleged that Sheriff is working in the interest of the Kaduna state governor Nasir el-Rufai and the minister of transport Rotimi Amaechi.

The group said the former governor is working alongside Ogun state senator Buruji Kashamu to secure a presidential and vice presidential ticket for el-Rufai and Amaechi come 2019 general elections.