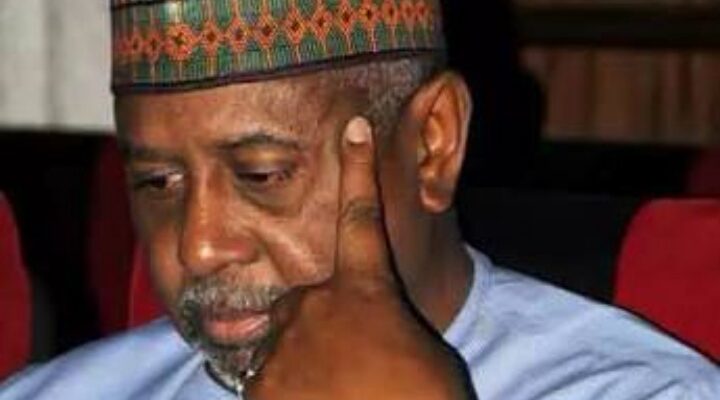 Former National Security Adviser (NSA) Colonel Mohammed Sambo Dasuki (rtd) has told a Federal High court in Abuja that he is being punished by some persons at the highest level of power in the country for perceived grievances held against him while in active military service many years ago.

Though he did not name any particular person, Dasuki said that the punishment being meted out to him was unfortunate having been borne out of mere vendetta.
In an emotion submissions while reacting to the government request for his secret trial, Dasuki who spoke through his counsel Mr. Joseph Daudu, SAN, told the court that he has rested his case in God for the ultimate judgment.

“It is crystal clear that the defendant (Dasuki) is being punished by the powers that be for the perceived offences committed long before. We leave them to the Almighty God for his ultimate judgment”.

Recall that Dasuki had been arraigned before three different high courts for various allegations and was granted bail but was rearrested in December last year by the Federal Government and has since been held incommunicado.

At the resumed trial today, the Federal Government had approached the court, seeking secret trial of Dasuki who is facing charges of unlawful possession of firearms, money laundering and breach of trust.

Previous PostPDP: Sheriff should please go home — Bode George * Ex-presidents should intervene in dispute between Senate and Presidency * Insists the rule of law should be applied in Fayose’s matter Next PostSoldiers kill one in Imo over N350, 000