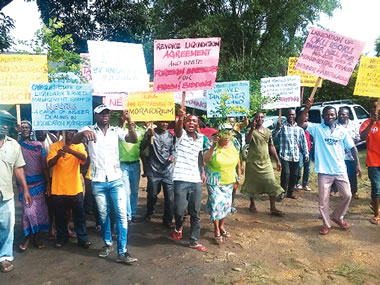 INDIGENES of Oku Iboku community in Akwa Ibom State have protested against what they perceive as asset-stripping of Oku Iboku Pulp and Paper Mill by Negris Group, an indigenous engineering company servicing the energy and industrial sectors.

The people, who took the protest to Itu Paramount Ruler palace, claimed that since the Negris Group took over the mill, the firm had resorted to asset-stripping instead of adding value to the mill.

One of the protesters and community leader, Dr. Demson Ekong, on Monday, listed the items that had been sold out as 22 Isuzu logging trucks, caterpillar; D7, D8, grader, bucker loader, mountain loggers, shredder and excavator.
Other items, according to the aggrieved community member, are central air-conditioner; tower crane; mobile wielding machines; 500KVA Cummins generator.
Ekong said, “The company that bought the Oku Iboku Pulp and Paper Mill for many years has not done anything about the company other than resort to asset-stripping.

“Negris has sold out dozens of equipment and it keeps on promising us that the following month, the mill will be reactivated for operation. This keeps going on like that and nothing has happened.

He said the community had given Negris or the FG two months to reactivate the mill or face the risk of a shutdown of the mill while the entire estate would be turned to a farmland by the community.

The engineering consultant to the organisation, Mr. Imo Ekaette, said the community had a right to protest following the delay in reactivating the mill.

He, however, denied the asset-stripping allegation, adding that he had an inventory of the entire equipment of the company.

Ekaette explained that some assets were already obsolete, adding that assets replacement by the group should not be seen as stripping.

“I have told the community that there are no asset-stripping in the company. Some of the assets Negris acquired are obsolete. Some manufacturers of these assets have folded up and spare parts are not even available for them.

“If replacement is the asset-stripping, I don’t understand it. I have inventory of all the assets in the mill. The community has a right to protest because of the delay in reactivating the mill, even I, myself; I am affected.
“The mill was supposed to generate employment for the teeming youths in the area, I sympathise with them,” the engineering consultant to Negris added.