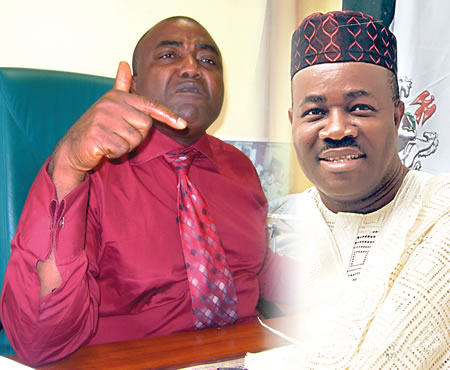 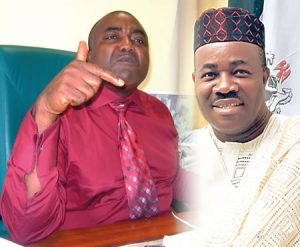 On Monday, the National Assembly caucus of the Peoples Democratic Party(PDP) held a closed-door meeting to deliberate on the fate of the party ahead of the May 21 national convention. Group Politics Editor, TAIWO ADISA, examines the intervention by the lawmakers this time

LATE on Sunday night, the Minority Leaders of the Senate and the House of Representatives, Senator Godswill Akpabio and Honourable Leo Ogor, jointly issued a statement calling a meeting of the opposition lawmakers  on Monday May 16. It was their reaction to the state of the near free fall the Peoples Democratic Party (PDP) had found itself in recent weeks.  The joint meeting which had as its sole agenda the state of the party was, according to the conveners, called to ensure that the party could go into the planned national convention on a united front. The lawmakers said they were worried about the trend which had seen the different strata of the former ruling party divided and disjointed.

Ahead of the call for that emergency meeting, the PDP was practically in disarray. The Board of Trustees (BoT), the conscience of the party, was at loggerheads with the National Working Committee (NWC), which oversees the day-to-day affairs of the party. The group of former ministers has also expressed their opposition to the planned National Convention.  Leaders from the South-West who spoke in opposition were in unison with other leaders from across the country who declared war on the zoning arrangement announced by the zoning committee which retained the seat of National Chairman in the North East. Some concerned stakeholders, largely elders of the party led by Professor Jerry Gana, took things to another height when they announced a strong opposition to the convention last week. The concerned stakeholders had announced the sack of the NWC and sought the postponement of the convention.

Though no one actually said this, the main issue in contention was the indication that the incumbent national chairman, Senator Ali Modu Sheriff, would stay longer that he initially promised, and that the zoning arrangement announced by the Governor Udom Emmanuel-led committee favours Sheriff. There has also been the fear that Sheriff might use his position as National Chairman to favour himself in the 2019 presidential race. As the centre appears not to be holding within the fold of the once acclaimed largest party in Africa, senators and members of the House of Representatives became uncomfortable. They therefore decided to set up the Monday meeting.

Preceding that meeting were caucus meetings at the Senate and the House, where the lawmakers agreed on the way forward for the party. Around 4.pm on Monday, the lawmakers headed for the Hearing Room O2 of the House, where they deliberated behind closed doors. At the meeting, the they expressed concern at the turn of events within the PDP, which many Nigerians expect to take up the opposition role at this time, adding that there are fears that some persons are really out to serve as the party’s undertaker. They agreed that, since the main contention among the party’s stakeholders remained the question of whether Sheriff would contest the 2019 presidential election, an undertaken should be secured from the national chairman to the effect that he would not join the presidential race in 2019 and that the chairmanship seat would revert to the South at a midterm convention in 2018.

It was gathered that the lawmakers intend to meet with Sheriff, as well as the members of the BoT and the governors to resolve the crisis ahead of the national convention on May 21. A committee of the National Assembly caucus was also mandated to douse tension among the different segments of the party by ensuring that a united front prevails ahead of the May 21 national convention. A source at the meeting said: “Most of us agreed that the crisis in the PDP is about the issue of suspicion of whether he will join the 2019 presidential race. He came in and promised to spend three months and that has changed. So nobody trusts that he will not join the presidential race.”

After the closed-door meeting, the Minority Leaders took turns to describe the meeting to newsmen, while expressing confidence that the committee set up by the NASS caucus would yield results. Ogor said: “What we have done here is to ensure that the entire caucus of the National Assembly is making preparations towards the whole convention. You can clearly see that the PDP will have a convention that everybody in the country will be proud of. We deliberated extensively on issues and I believe that at the end of the convention people will congratulate us.”

On his part, Akpabio also told newsmen: “One of the things we decided on is that we cannot go into a national convention that is rancorous. And so we have set up a twelve-man committee to meet with the various factions and interest groups in our party within the next 48 hours to iron out all the grey areas.

“We are meeting with our governors. We will meet with the BoT and other stakeholders under the auspices of Concerned PDP Stakeholders.  I believe strongly that in the next 48 hours, the entire PDP family will be united and by Thursday/Friday, we will be headed to Port-Harcourt, with songs of joy, with bands and you will be impressed that, indeed, the party is back on track.”

Sources at the meeting however confirmed that the caucus had agreed on the need for Sheriff to sign an undertaken to affirm that he would not be part of the 2019 presidential race. It was also confirmed that the strategic committee set up by the lawmakers would have six members each from the two chambers. Some of the members include Senators Enyinnaya Abaribe,  Danjuma La’ah; Biodun Olujimi, Ogola Foster,  while members of the House in the Committee include Honourables Tajudeen Yusuf, Wole Oke and Sunday Karimi, among others.

It would not be the first time the National Assembly caucus would seek to intervene in the crisis rocking the PDP. In February, when the news of the possible emergence of Sheriff hit the airwaves, senators and members of the House took up arms against his choice. The lawmakers joined other party members who expressed concern about Sheriffi’s public perception and insisted that the chairmanship seat should head southwards since there was an agreement that the party’s presidential ticket would stay in the North in 2019.

But the voices from the National Assembly caucus got drowned soon afterwards as the caucus of the governors, BoT and other leaders rallied support for the national chairman. This time, however, it appears that the lawmakers are keying to a general belief in the party to the effect that the burgeoning crisis should be nipped in the bud right away. Thus, unlike the situation when Sheriff came on board, the caucus this time does not appear to be talking to a deaf party.

Just as the lawmakers were making consultations, the BoT and other stakeholders also scheduled meetings aimed at addressing the crisis in the party. The party’s concerned stakeholders who are mostly members of the BoT came face to face with Sheriff, who wasted no time in apologising for the words his media aide used on the elders last week. Some concessions were reached and even before the National Assembly caucus reports progress to the lawmakers in NASS, it became almost certain that their quest for a unifying convention is coming to fruition.